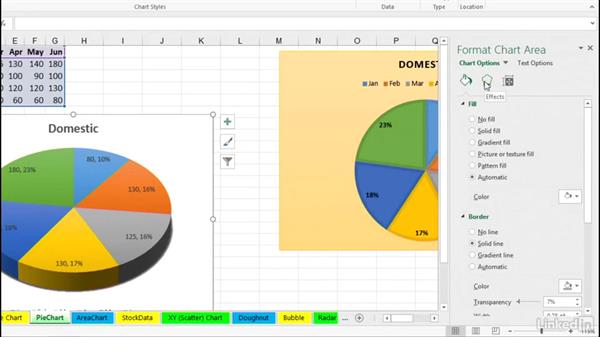 - [Voiceover] A widely used chart type is called a pie chart and on this worksheet called Pie Chart, we see two examples. The one on the left, below the data, is a three-dimensional pie chart. The one to the right is a two--dimensional pie chart. And at different times you'll favor one over the other. The three-dimensional one has a little bit more flair to it. Now, one of the first things that people want to do with a pie often is to pull out a wedge. And I think everybody's done this at least once. You click the pie, you try and, for example, pull out a wedge here and it pulls out all the wedges.

Nothing wrong with that really. Let's undo that with CTL + Z. If you'd like to extract or pull out one wedge over another, simply click that wedge, pause, click it again, and only that wedge is selected, and then you can pull it outward if you wish. Often that will make the pie chart a bit smaller, too, but we're giving it special emphasis. Now that chart isn't labeled properly just yet, but the other thing you want to recognize in both two-dimensional and three-dimensional charts is the so-called 12 o'clock position. Think of the data as beginning there and then moving clockwise.

So the blue wedge, even though we don't have it labelled just yet, is going to be representing the January data. Now, I want to create a chart based on the data and bring out something that's, in retrospect, pretty obvious. I've got all this data highlighted. I'm going to create a pie chart, simply by going to the Insert tab on the ribbon. And when you come to the Pie Chart icon, click the drop arrow, notice another chart type is there, too, we cover this in a later movie. The two food items, I guess you'd say, are pie and doughnut.

They're both together here. But let's say we were to create a 3-D pie. Now, notice that I did have the data selected for Domestic, Europe, Asia, and Latin America. But immediately, the title says "Domestic". So we can only use a pie chart for a single row or a single column, we can't have a multi-layered pie. That's why sometimes it might be worth exploring 100% stacked option under column or bar. So even though all that data was highlighted, we're only showing domestic and sometimes people overlook that and they're wondering where the other data is.

We certainly could create three additional pies for Europe, Asia, and Latin America. But this is a limitation of pie charts and it's just the very nature of the chart that causes it to appear that way. Now there's something else that's really strange, too. And if I were to say this in a certain way, it would just sound kind of ridiculous. There's no such thing as a negative piece of pie. Think about that for awhile and it doesn't really make any sense. But what I'm going to do with this pie, by the way, both pies on the screen are representative of the data for domestic here, I'm going to change that February entry to a minus 130.

Now, probably in a real life situation, if that were a negative, it wouldn't be exactly the same as what the positive number had been. But as I press Enter, keep an eye on both pie charts, the proportion of the wedges will not change at all. And, in effect, we've created something that's inappropriate completely. The only slight change you see on those two charts is the minus in front of the label. Here were see a minus 130, a minus 18% percent. We see that on the right. Anytime you've got negative data, don't even think about creating a pie chart, it makes no sense.

The whole idea is that these wedges are different items that add up to a whole, the 100 percent. So it makes no sense here. So I'll undo that with CTL + Z. Notice again that Excel doesn't create an error or say "Not Possible", it simply goes ahead and treats the number as if it were positive. It only changes the labeling. So I'll press CTL + Z. There are some other changes you might want to make regarding the appearance, particularly with the 3-D pie chart. I'm going to pull that wedge back in, first of all.

And then double-clicking in the chart area or plot area, we'll see some options off to the right. And if you click the pentagon for Effects here, we've got some 3-D Rotation here. Now as I start to click these arrows here, keep an eye on the 3-D pie chart to the left. It's starting to rotate. I wouldn't recommend that, but certainly there could be some situations where that's appropriate. Back to zero. We can rotate it this way, too, and I think you can see immediately what's happening there. Now, I don't recommend this either, although, I think you can see possibly there's some use for it, but we see how it's tilting the pie in a different way.

Perspective is the one that really makes some drastic changes, I think, if you keep using this. Now, we can see the percentages, but look at that yellow piece in the front. That represents 17 percent of the pie. And that green wedge in the back is 23 percent? Well, perhaps if you look at the center angles, that would make some sense, but I think you can see, this is very misleading if we do this. And once again we see this Perspective choice which I almost want to say is called distortion, but it does give us a different look.

But here's something else to consider, too. Height as percent of base. Here's 100. I'm going to start clicking the down arrows below it. You can, of course, type in a number here, too. But as I click the down arrow here, watch the pie get flatter and flatter and flatter. So perhaps based on the content, or the industry that this business is involved in, maybe that's appropriate if that represents some kind of land use or something. So I click the up arrow and I'm clicking it rapidly here, we can go all way to 500, a different effect, a different feel there, and again, that's pretty much subjective, does it fit the data that your organization is involved in or how's that looking, but at least we got some variation on that, too.

And of course some of the time we're just doing this for added flair. You can still pull out the wedges regardless of the size, if you want to do that sort of thing here, we can certainly do that. Pull out that one or the other one and so on. So we can make those kinds of changes. The other concern here might be with regard to labelling and although we can approach that different ways, I think maybe the best way is, if these labels aren't quite what we want, let me pull the chart up here a little bit and show that we do have a legend down there to remind us what each wedge color actually means, so that could be complete possibly.

But if we click the plus right here, we've got data labels, click the arrow to the right, and we can certainly change the location of these. Sometimes Outside End might be better. More options here. You'll see a choice out here that might be a little bit mystifying. It says Show Leader Lines, which is checked but yet we're not seeing them. But first of all, consider whether you want Series Name, we see that, Category Name, now that's duplicating what we see in the legend, so you might want to either get rid of the legend or keep this.

I think you can see though, by experimenting with this, we can get some decent labeling out here pretty easily. Consider the use of the Series Name, the Category Name. Now since it says Domestic in every case here, I think we wouldn't want to see the Series Name, but the Category Name that puts in the month, possibly, as an exception. Now the Show Leader Lines is, in fact, but we don't see anything happening. So look what happens here if we click on the chart. Point to one of these and simply drag the box outward. Now I wouldn't say that's better, but you know it gives it a different look, a different kind of feel.

If you had many, many wedges, and you want to be a little bit careful of that, but if you were showing 12 months here, or if it's a different kind of chart where you've got a larger breakout. Sometimes when you've got too many wedges or a lot of wedges, these callouts can be helpful in clarifying how we read this. But in the example here, doing this for three of the months, not the others, probably wouldn't make good sense. So I'll press CTL + Z a few times. So those are some of the options we want to consider. Keep in mind, too, that as we work with this, sometimes two-dimensional is better, sometimes three-dimensional is better, but it's easy to create these.

Remember the limitations, we can only show one column or one row with pie charts and we cannot show negatives intelligently.