Creating or modifying a slide layout 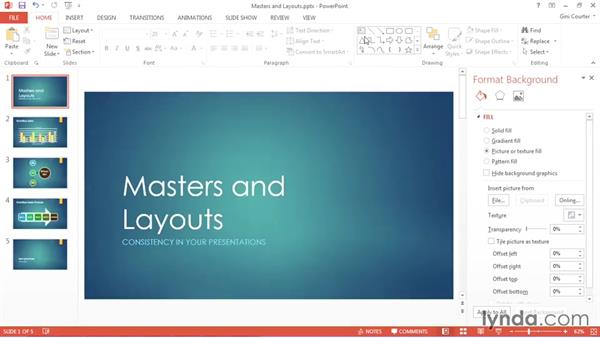 - Here's the gallery of layouts that are available right now in this presentation from this particular template. I have a total of 15 different layouts that I can use. I would hope that one or more of them would meet my needs. If they do not, then I can create a new layout, or I can modify a layout. Actually, we create a layout by copying a layout that's here already and modifying it. We'll do all of that in Master View. Let's go to View, Slide Master, and I'd like to modify this particular Picture with Caption Layout.

We have an icon that allows us to add a picture. We have a place to add a picture, we have a place for a title, and we have a place for text. Now, I may want to keep this particular layout. The layout that I want to create is going to leave a space for an image in the upper right corner, but it's going to allow the text to run all the way across underneath it. It's actually a slide style that we're using in two different places. We use it when we're featuring employees in a presentation. On the left, we'll have their name and their title. On the right, we'll have an image, a head shot, and then below that, we'll have some text that's specific to a presentation.

Cool. I can also start with an almost-blank layout. If I right-click and I insert a new layout, I'll get a layout that has very little on it. It will be Title Only Layout. If that's what I want to choose to work with, I can do that. Then I can add other items to it. Remember, I can insert particular placeholders. Let's play with the two of these that we have. First, here's my Person or Picture Layout. The first thing is, the image that we're going to use for pictures is like that. I'd like it to sit just a little bit higher.

Then, our text box here, we're going to go ahead and wrap it underneath, just like that. There's my new layout. Its name, Person or Product Picture Layout. Looks just great. Now, here's the other new layout that I added by inserting a layout. It's a Custom Layout layout, and I'd like this to be a layout that we're going to use for a specific purpose. That purpose is that we're going to put a large image of a slide background here. I want to insert a placeholder, and the placeholder's only going to be for a picture.

We won't put anything else here. It says, "Where would you like this to go?" I'm going to insert that right there. Notice that it says "Picture" and it has a placeholder only for a picture. Now, what I'd like to do is, I'd actually like to check its size and position. It's about four by 10. My images are actually slightly different in terms of size. We have four by six images. So I'm going to change this 10.9 and this height of four to four by six, just like that.

There's my four by six image. If I'd like this to be a little closer to the center, I'll put it right there. Looks good. Now, let's rename this. This layout now is going to be called Background Image, and we'll rename it. Let's close the Master View. I'd like to create a new slide now. Notice that I have more choices than I had before. If I scroll down, I will end up finding my Person or Product Picture, right there. Click the icon to add a picture of a person. I do have some employee photos, those employee avatars.

I'm going to add Rob Molina's picture, just like that. This is how we use this. And then we can add some text about Robert below. This layout now exists and can be used over and over again. I'm saving it along with my presentation. It's also ... Let's add a slide to test our other layout. New Slide. Background Image. Jump back out of our employee photos. Insert Backgrounds, just like that. If you find yourself moving items on one slide, two slides, several slides, consider coming in and creating a custom layout that will do exactly what you need done in your template, because it makes it easy for you, it makes it easy for the next person, and, just as importantly, if I change the layout, I'm changing the slides in the presentation.

Let's go back and modify this layout. Let's go to View, Slide Master. I'm on that slide, so it will take me right here. Let's say I want to put the picture on the left and the title on the right. Notice that the guides snap out for me so that I can line things up very precisely. There we go. Close the Master View. There's my slide. One cautionary note: when you're working with the slide masters and the layouts, if you modify something on the slide master, then the change that you make here will affect all of the layout based on the master unless you've already done some customization.

For example, if I've gone to this slide, which is a Title and Content slide, and if I have changed the types of bullets that are used on this particular slide layout, then I'm disassociating that feature from the slide master. If I then return to the master and make a change, that change will not affect the slide layout that I've already changed. The way to think about this is that a local change made to one slide layout overrides a change made to the slide master.

For that reason, you should try as best you can to make most of your changes at the level of the master. In the same way, if I make a change on a slide, not even a layout, but I go into a particular slide now, and I make a change, I move this picture box down here, now this placeholder lives here, where Rob's picture is. Just kind of center it under there. Now let's go back to slide master. Let's just adjust the position of this picture box right there.

If you understand how this works, and use these tools appropriately, you will be making most of your changes here, to the slide master, or to a specific layout. You can either create a new layout, again, from the Title Only slide or by duplicating a slide that's already here, to be able to represent the content you want to represent in your presentation.