Choosing a chart layout with the Quick Layout option 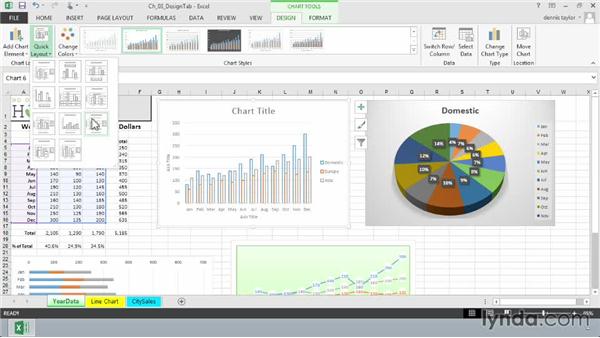 One of Excel's most useful features when it comes to charts is the ability to quickly complete, in quotes, a chart. This chart here, this column chart to the right of the data, maybe doesn't quite have everything you need in it. And you're not quite sure exactly what it does need. But if you click the Design tab, in the Contextual Tab section, under Chart tools, you will see the second button from the left, Quick Layout. This particular button doesn't entice us. As we look at this, it's kind of gray, it's kind of small. And if your chart is over on the left hand side by the way, it's possibly being overlapped.

But as you slider over these choices, you begin to recognize some features that are applied or not applied. And some might be exactly what you want. And notice we're not talking about styles here. We're just talking about content. Where is the legend? Is it giving us room for a title on top? How about titles down the side? Which of these is best? And they don't have very interesting names. They're called layout seven, layout eight, etc. I tend to like layout nine. Now, if this is a Bar chart, we'll have fewer choices here. Or more, it all depends upon the kind of chart we're working with here. So I'm going to choose layout nine.

And compared for example, with layout eight, what's the difference? Sliding over that one. Layout eight does not have grid lines. No legend, either. I think we'd want a legend most of the time. Layout nine does do that. It provides room for titles on top, down the left-hand side and below, so let's go with it. There we are. Next step, then would be to make some changes. We'll just put in the chart title. We'll just type it in. And say Sales dash 2013, if that's what it is.

Type it, press Enter, and our sales are in place. And if these are in millions of dollars, we could say sales in millions, or just say in millions of dollars. And if we want a title below this, we've got an Access Title down here as well too. I from time to time don't want anything here, but if I wanted to accentuate some additional bit of information here. Maybe this is just from one of our offices. Maybe it's from the Cincinnati regional office or something like that. Or just leave it blank. Either way. Again, as you type this, you don't see anything until you press Enter.

And so there we are there. Its not necessarily to say, that we've got everything we need right now, but that's a lot easier than simply trying to add these elements one by one. Now, if I take these out manually, which I'm going to do, sort of reverting to the way this was before. And again, accentuating the idea that if we don't see anything here, what are we going to do? Go to Quick Layout, decide which of these is going to give us the features that we need most, and then go down that path. And so after you've just created a chart with maybe one of those quick methods, this might be the next step, where you add the chart elements that you think you need.

Of course, you gotta do the typing from time to time, but this is a great feature for getting a chart up to speed. It's called Quick Layout, it's on the Design tab.

Video: Choosing a chart layout with the Quick Layout option