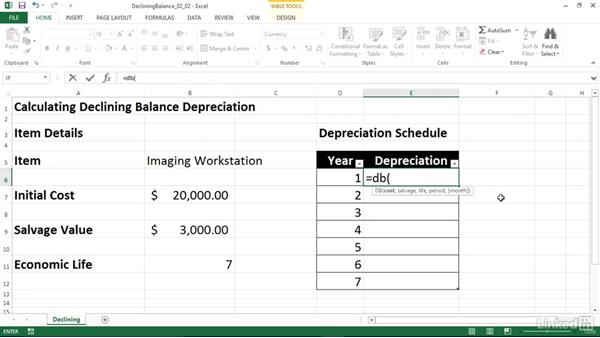 - [Instructor] In the previous movie, I showed you how to calculate the depreciation for a purchase based on the straight-line depreciation method, where the same amount of depreciation is taken out each year. However, there might be tax benefits for taking depreciation early at an accelerated schedule. In this movie, I will show you how to use the declining balance depreciation method. And my sample file is DecliningBalance_02_02, which you could find in the chapter two folder of your exercise files collection.

I have the initial cost, which is here in cell B7 of $20,000. Then in B9 I have the salvage value, which is the amount that I estimate I can sell the object for when it has reached the end of its useful economic life. Third, I have the length of its economic life. In other words, how long the item will be useful. In this case, it's a fairly high powered computer, so we'll assume an economic life of seven years. Next we need to know the year for which we are calculating depreciation because there will be more depreciation in the early years of its life and less later on.

And here we have an Excel table with years one through seven. I'll click in cell E6, which is the first data cell in the depreciation column of my Excel table. And I will create my formula. So I'll type an equals sign. And we're using declining balance, that function is DB, then a left parenthesis and I need to know four things. The first is the initial cost. That's in cell B7.

Then a comma. Then the salvage value, which is what we figure we can sell the purchase for at the end of its life. That's in B9. Then a comma. The length of its economic life, which is seven years. That's in B11. Then a comma. And then finally the year for which we are calculating depreciation or the period and that is cell D6. I've clicked that and because I have an Excel table, Excel filled in with @Year to refer to a cell in the same row as the current cell, but in the year column of the table.

One thing that I should note is that I'm using a table so that that the formula will populate automatically. Excel will do that for me. The problem is that as the formula is copied, then the cell references B7, B9, and B11 will change and that's because they are currently relative references. So that means I need to click inside of the B7 reference and press F4. Now I have an absolute reference and regardless of where this formula is copied, it will still point to B7 instead of pointing you to B8 here, B9 here, and so on.

I'll do the same for B9. Click in there and press F4, make it an absolute. B11 I'll do the same thing. So now I have my formula of B7, B9, and B11 never changing and we're still looking for the year column cell in the same row as the cell where we have our formula. So I'll type a right parenthesis and press enter. And there we have our calculations. The first depreciation is $4,740 and you can see the declining depreciation or declining balance as we go further.

10/9/2016
Analyzing financial data can seem intimidating, but Excel 2013 has a wide range of functions that you can use to perform these analyses quickly and easily. This course shows users how and when to use each of the functions available to them in Excel 2013. Learn how to evaluate cash flows; calculate depreciation; determine rates of return, bond coupon dates, and security durations; and more.
Topics include: