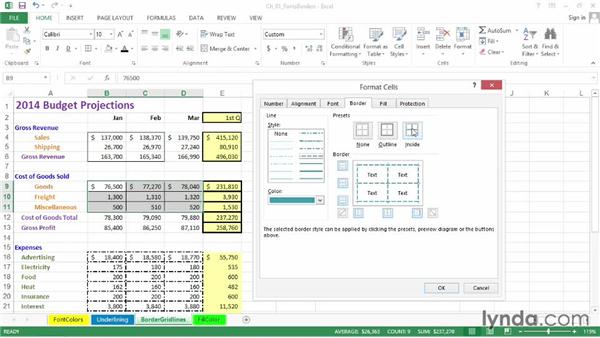 - In this worksheet called BorderGridlines we see border effects around a number of different cells, not only here in columns B and C up above, but also a number of them in column E and a few more off to the right, even though there's no data there, in columns G and H. Applying borders is easy, suppose we would like to apply borders just for these cells right here. On the HOME tab in the ribbon, we've got a drop arrow for various Border effects and quite a few choices. Notice that a lot of these only apply Borders on one side or another.

Here's one for All Borders, putting borders around all cells. Here's a Thick Box Border, just for the perimeter. (mumbling) choose All Borders and we see the effect here. Often when you apply borders it's difficult to see the actual effect until you click outside of the highlighted cells. Also in this worksheet I've turned off the gridlines to make these more obvious. But let me turn them on for a bit too, just to see the effect here. On the VIEW tab you have the option of showing the Gridlines or hiding them, and now we see that they're present.

We can also apply borders in another way too. Suppose we're not quite sure what we wanna do here, but we do wanna use color and the standard feature here that we used on the HOME tab for applying Border features doesn't at first give us that option. However we can choose More Borders and that brings us to the Format Cells dialog box on the Border tab. Now, not necessarily at first, but you might want to first pick a Color, so go here. And again, with light backgrounds dark colors tend to work best, maybe you wanna use this dark blue right here.

Then maybe decide on which Style you want, there are quite a few choices here. There's a thick one, here's a dashed one that way. Then using the icons that we see on the perimeter here, as well as these up above, we can get a preview of what we're about to do. We might want an Outline, we might want these on the Inside as well, maybe we don't want them on the inside and we can simply click these lines to get rid of them. That would just provide a perimeter. We could click Inside again and bring them back. Now you can even take off sides, that probably wouldn't make a lot of sense.

Simply by clicking here, so you've got lots of choices. You can even put in diagonals, I think you probably wouldn't want that. And other features here as well. So we're about to apply this color here, this blue-green dashed border around those cells. Clicking outside again reveals this a little better than before. If you don't have the need to use unusual combinations or unusual color styles and line styles, you can simply select cells. If I wanna put a border on these cells here, notice there's a keystroke shortcut referred to in column G here, it's Ctrl+Shift+7, or Ctrl+Shift+&, same key, click away from it and you see the effect there.

That's a little bit tricky to see since we had these over here. How do we get rid of borders? And while we're at it maybe we're saying the following, "Let's get rid of all the borders in this area right here. "Let's get rid of all those." We can press Ctrl+Shift+_, click outside of this, we'll see what's happened. We got rid of the borders. Now there's one left over here, that could be a border on this cell. And so it could get confusing at times. Ctrl+Shift+_ will get rid of that one as well. These other features here are applied in the same way.

Usually by way of that dialog box. Another way to get there too is simply to select the cells in question, right-click, go right into Format Cells, and you could also do this with Ctrl+1. You're not always guaranteed that you'll be at the Border tab, but if you are you'll be back looking at these choices that we had seen before. So quite a few different options for highlighting cells by way of applying borders. And here too, as with the other formatting features we are not in anyway altering the content, we're simply changing the display for different ways to provide emphasis.