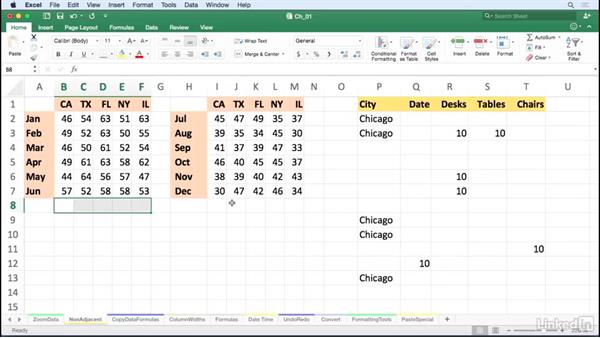 Instead of repeatedly typing the same data in different non-adjacent cells, first select a cell or cells, release the left mouse button and use the control key and mouse to select another cell or cells; repeat for additional cells. Then type the data - text, numbers, or formulas - and press control+return.

- [Voiceover] We're looking at a worksheet called Non-Adjacent, in the Chapter 1 file. I'm about to put in some city names in column P. Imagine I got a sheet of paper, start checking sales in different cities, it turns out that in these two cells right here, and also in a few cells below that, we need to put in the same city name. I've highlighted these two cells, I've let go of the left mouse button, and now holding down the command key, I'm going to highlight two other cells down here, and then another one farther down, and all these need to contain the name of the city Chicago, so I'll type Chicago.

As I'm typing it, it looks as if the data is only going into one cell, and that's what will happen if I simply press return, but if I press either command + return, or control + return, it makes no difference, the same data will go in all these cells at the same time, and there it is. That's gonna save a lot of time. It turns out that some of the numbers we needed in the next columns also are recurring, and in this case, I've got two cells here that need to have the value ten. So, once again, using the mouse to highlight these, letting go over the mouse momentarily, now holding down command and highlighting a few other cells that need that same value, the value ten, and one cell over there, and another one right there.

So, I'll type a ten, and once again, I'll press command + return, or control + return, and the same data will go in all those cells. Over to the left, in columns B-F, I wanna put in a total right here. It could be a sum, it could be an average, maybe it's a median, any of those, and over here, I wanna do the same kind of things, so I've already selected these cells, and now letting go of the mouse, and now holding down command, I'll highlight these cells. At the moment, the active cell is in cell I8, so I'm going to type in, for example, the average function, left parenthesis, and even though I want to do averages for all these different columns here, I'll simply highlight the cells right here, as if I were only doing the average for these cells, and I will not press return, I'll press control + return, or command + return, it's equivalent.

And, the same function will go into all these, and of course, as you would hope and expect, not only are we getting an average in this column, but also over here, and in the various ones over on the left-hand side as well too. So, anytime you need to put in the same information in different cells, select the cells first, if they're not adjacent, use the command key to select non-adjacent cells, along with the mouse, and then as you type your entry, remember to press control + enter, or command + enter, and sometimes it might even be consecutive cells, maybe in a list over here down the left-hand side, I need to put in the same information, contiguous cells.

Here it might be a trade off, I could put the information in cell A10, then copy it downward, or I could highlight these cells ahead of time, and maybe I'll just put in the word city, control + enter goes in all those. So, shortcuts for entering data, particularly when you've got situations where you want to put in the same kind of data in different locations, and as we saw from the examples, we were able to do this with text, with numbers, and with formulas.

5/11/2016
Excel expert Dennis Taylor helps Excel for Mac 2016 users take their spreadsheet skills to the next level with this collection of tips and tricks. He begins with his top 10 productivity boosters, and then highlights navigation, display, and selection techniques to keep you moving quickly.

The course then dives into data entry and editing techniques, formatting and drag-and-drop tricks, keyboard shortcuts for working with formulas, data management strategies, and chart tricks. Short on time? Make sure to check out the "Ten Tiny Tips" chapter for a quick productivity boost.
Topics include: