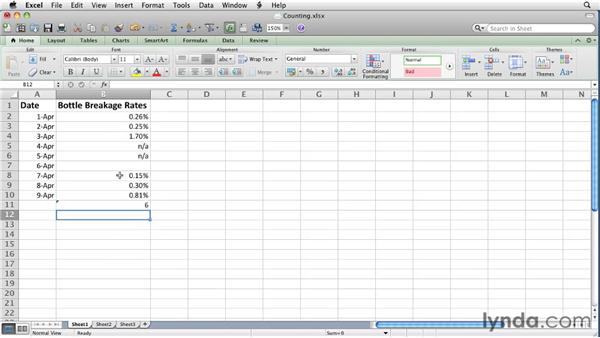 You might put an n/a to indicate that you didn't take a measurement that day, and you can also have a blank cell just in case you forget to enter a value. So, the count function that I'll show you will take care of all of these scenarios. So now let's creates a function that just counts the number of cells that contain a numerical value. For that you type =count, and then and a left parenthesis. Now all you need to do is type in the range of cells you want to examine: =count(B2:B10), and you get the number six.

So you have one, two, three, four, five, six numerical values, and that corresponds with our answer. Now let's say that you want to count the number of cells that contain any value at all, in other words all the cells that are not blank. To do that, we use the count A or count all function so =counta and a left parenthesis, and again the same cell range, B2:B10) close it up, hit Return, and the answer is 8, and that corresponds with our measurements here.

We have one, two, three, four, five, six, seven, eight cells that contain any value, so those are the six numerical values, and the two n/a. If you want to count the number of cells that are blank, in other words the ones that have values in them, then as you probably suspect, you can use the countblank function. Left parenthesis, B2:B10, hit Return. The formula returns the value one, which corresponds with the one blank cell in our list.

These three variations on the count function help you discover the number of the cells in a given range that contain particular types of values. In larger worksheets using a count function tells you how much data you have in your collection, which can often be surprisingly valuable information.