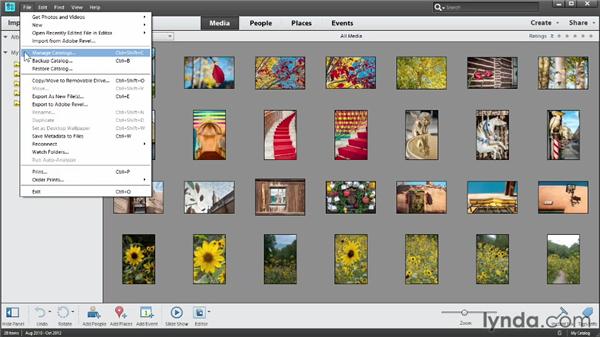 The mechanism that the Organizer uses under the hood to keep track of your photos is a database. That database is called a Catalog in Elements parlance. Understanding how an Organizer Catalog works will helps you maintain the important links between the catalog and your photos. If you're trying to picture what an organizer catalog is, you might think about the big card catalog that you'll find in a traditional library. It almost goes without saying that the library card catalog itself doesn't contain library books. Instead, it contains cards, each of which is a record of information about a particular book.

Included in that record is an indication of where that book can be found out on the library shelves. If a book is moved from its original location on the library shelves, its record will need to be updated or the book will be considered missing. A Catalog in Elements Organizer works the same way. It contains a record of each photo, video, or other media file that you include in that Catalog. That record contains three kinds of things. It contains the Preview Thumbnails that you see in this Grid; it contains some information about each photo, called Metadata; and it contains a link to each photo wherever you happen to store that photo out in your file structure.

So, when you're importing photos to an organizer catalog, as I'll show you how to do in the next chapter, don't be misled by the word Import that Elements uses to label that process. When you import, you're not actually importing your photos into a container called a catalog, you're just importing information about the photos, along with links to the actual photos, into your Organizer Catalog. There are a couple of consequences of working with a catalog that you should be aware of. For one thing, remember that the thumbnails that you see on the face of the organizer are not your actual photos.

They're just small copies that are automatically made for display on the face of the organizer. So don't make the mistake of throwing away your actual photos in your file system, thinking that you have a full sized copy here in the Organizer. Second, it's important to maintain the links between your catalog and your actual photos out in your file system so that Elements doesn't think the photo has gone missing. That means that once you've included a photo in the organizer, you should never move it or rename it out in your operating system. Instead, you should do that sort of work from inside the organizer, as I will show you how to do later in the course.

I'll also show you how to relink a photo, should it go missing from your organizer. You'll start out with one catalog that's made out for you automatically. The name of that catalog is My Catalog. You can see its name down here at the bottom right of the organizer. If you want to create a new catalog or change the name of this catalog, or move the location of this catalog, then you'll go to the Catalog Manager, which is located under the File menu. From File, I'll choose Manage Catalogs to open the Catalog Manager.

Here, you can see all the existing catalogs. There's currently just one. And if I select that catalog, I could then come over here and click Rename to change the name of the catalog, or Move, to move the physical location of the Catalog file, which is a separate file from your photos. If your catalog is reacting slowly, you can try to optimize it to speed it up or you can repair a catalog that isn't working properly. If you made a catalog in an earlier version of Elements, you can use the Convert button here, to convert that catalog into an Elements eleven catalog.

You're also offered that opportunity when you first launch the organizer. From here you can create a new catalog. I recommend that, for the most part, you stick with one single catalog and put all of your personal files there. That's because you can only see and work with one catalog at a time, and Elements can only search through one catalog at a time. But there are some special cases in which you may want to make a new catalog. For example, using Elements on the same computer, each might want to have his or her own catalog. Another special case where you may want to have a new catalog is for the Exercise Files for this course, so that they don't get mixed in with your personal files.

So let's make a new Exercise Files catalog. I'll click the New button here. I'll call this Catalog Ex Files. and I do want to import free music into this Catalog so that I have some background music that I could use with the slideshow. So I'll check that box and then I'll click okay. That closes the Catalog Manager and switches me to my new catalog, my Exercise Files catalog. You can see the name of that catalog down here at the bottom-right of the screen. In this catalog, the only existing files are the Sample Music files.

And each one has a thumbnail here. I don't really want to see these thumbnails in the Organizer, so I can make them invisible by going up to the View menu and choosing Media Types. And here, I have a list of all of the Media Types that you can import into an Organizer Catalog. You can import photos, video clips, audio clips, Elements projects, and PDF files. Since I don't want to see these music thumbnails, I'll uncheck Audio here. And the thumbnails disappear, although that music is still here in the Catalog to be used.

Let's say that I needed to switch back to my other Catalog, the My Catalog. In that case, I could go back to the File menu, and again choose Manage Catalogs, and select My Catalog here in the Catalog Manager. But I want to stick with my Exercise Files catalog open so that I can show you how to import photos from the Exercise Files into this catalog in the beginning of the next chapter. So, I'll click Cancel here. Now that you know what a catalog is and how it works, I think you'll be better able to keep your own catalogs in healthy working order and stay tuned for the next chapter, where I'll cover how to import photos into an organizer catalog.

1/4/2013
In this course, photographer and author Jan Kabili walks you through importing, organizing, and finding your photos using the Organizer in Adobe Photoshop Elements 11. The course covers importing photos from your camera and computer; reviewing and evaluating photos; tagging images with ratings, keywords, people, and places; working with files and folders; and creating and organizing albums. Jan also shows how to find images with metadata and in the timeline, and how to apply instant photo fixes and Quick Edit image adjustments.
Topics include: