What is Camera Raw? 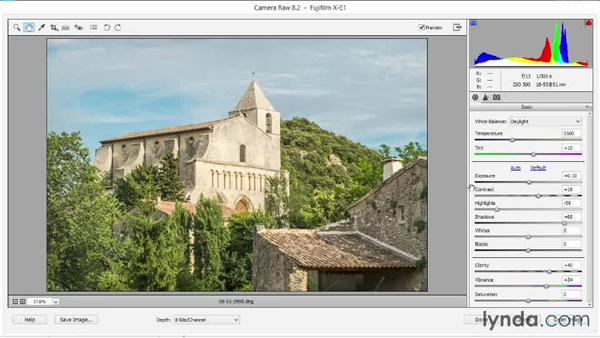 More and more of you are shooting Raw files these days. Cameras at many levels now have the ability to shoot in Raw format. And photo hobbyists as well as pros are realizing that Raw files have lots of advantages. When you shoot Raw, what you get is unprocessed data from your camera's sensor. Ready to shape to your own vision in post-processing. Things are different if you shoot only JPEG because your camera does a lot of the processing of JPEGS for you before you see them. Now there's nothing wrong with shooting JPEGS, particularly when you're just shooting snapshots. But if you're a photo enthusiast who's excited about exploring the benefits of working with Raw files, I think you'll enjoy working in Elements Camera Raw plugin, as I'll show you how to do in the rest of this chapter.

So what is Camera Raw? Well, as I said, it's a plugin for Elements' Editor. And the purpose of Camera Raw is to take the raw data from your camera's sensor, which technically isn't yet a photograph, and convert it to a photo, that you can see and work with on your computer. Camera Raw uses default settings for your camera brand, to display the converted photo initially. And then it offers lots of controls, some of which you see here, which you can use to fine tune the appearance of your photo here in Camera Raw. There are a number of great things about working in Camera Raw.

First, the adjustments that you apply here are non-destructive. They don't change any pixels in a photo. They just create a set of instructions about the appearance of a photo. Second, those adjustments are re-editable. At any time you can reopen a photo here into Camera Raw and modify the settings that you first applied to it. Third, working in Camera Raw is pretty straightforward. You don't have to remember what menu a command is located in or remember how particular features work. You can get most of your basic common photo corrections done by just working your way through the controls in the basic panel over here on the right side of Camera Raw.

Working from top to bottom, and the controls here are mostly simple sliders, all of which work the same way. Now that's not to say that you can do everything in Camera Raw. After you do your basic photo adjusting here, you may want to open your photo from here into Elements' Editor to do things that you cannot do in Camera Raw. For example, here you can't make a composite of multiple photos. Or add text on top of a photo or do detailed retouching on a portrait and more. For all of that, you'll take your photo from Camera Raw into Elements' Editor and that's done with just one click as I'll show you how to do later in the chapter.

A bonus that you may not know about Camera Raw is that you're not limited to working with just Raw files here. If you shoot JPEGs, you can open those into Camera Raw too to take advantage of the simple intuitive adjustment controls here. I'll show you how to open JPEGs as well as Raw files into Camera Raw next.

Video: What is Camera Raw?