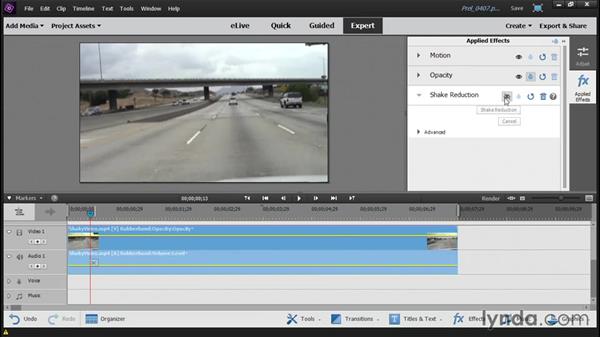 - Often when you've shot a scene, particularly with a handheld camera, it's got a bit more shake and wiggle in it than you'd prefer. Shaky camera work draws attention to the camera. We don't want that. We want to draw attention to the content of the video not to the cameraman himself or herself. Fortunately Premiere Elements includes an excellent tool for taking some of the shake out of these handheld shots. We've got a pretty shaky shot here. This is video shot from the passenger seat of a car driving down a highway. We're just going to press the spacebar to play it.

And as you can see wiggle and shake and tip. Let's select that clip on our timeline. We're going to go to the Adjustment panel, click on Adjust over here on the right side of the interface. And the second item down is Shake Reduction. Now this Quick and Detailed, 90% of the time Quick is going to work just fine for you. Detailed goes into a little more detail. It'll go frame by frame to take the shake out of the video. But Quick does a really good job. So I'm just going to select Quick. You can see shake reduction in progress.

If you look on the right you see that the Shake Reduction effect has been added on the Applied Effects panel. Now I'm going to reset my play head back to the beginning of the timeline, and once again press the spacebar. By the way, if you're having some trouble with playback, anytime you see an orange line along the bottom of the timeline ticker there, that yellow-orange line indicates that you need to render your timeline in order to get a nice smooth playback. So rendering your timeline is just a way to improve your preview.

And you can do that by either pressing the Render button here at the top of the timeline, or you can just press Enter on your keyboard. It only takes a second or two to render your timeline. And now when I play back the video you'll see something much closer to what my final output will look like. And you can see the play back is smooth. All the shake is gone out of the video. But we also have another problem. Take a look at this video. Look how poor the quality is. The bridge is blurry, the cars are blurry, the road is blurry. Here's the reason why: This is the Shake Reduction effect added to this particular video clip.

Which means that if we were to keep our picture at 100%, we're going to see the edges of that video moving around the video frame. In order to hide that then, the program zooms in a little bit. It cuts off some of the edge, so that now when we're looking at our de-shake-ified video, we're only looking at kind of a zoomed in area of it so that we can't see the edges moving around within the video frame. I think that, by default, the program zooms in too much.

That's why we're seeing this loss in quality. We're actually breaking up the resolution of the video. Here's a little trick: Go to this Advanced setting here under Shake Reduction, toggle it open, and you'll see that, by default, the program zooms in 50%. Let's lower that down to about 25%. The program has redone it's shake stabilization, it did that just within a few seconds there. I'm going to show you, this is the before. This is the after, now we have only zoomed in a little bit.

I'm going to once again render my timeline by pressing the Enter key. Now see if you see much more shake and wobble than you saw when we were zoomed in at 50%. Watch this. Still looks pretty smooth to me. How much lower can we go? I'm going to try it down to 15%. So the default setting here, for the Shake Reduction tool, I think is just a little bit high. And it's going to reduce the quality of your picture.

The more you zoom in, the more you're breaking up the resolution and the more you're going to see more blur and less sharpness in your picture. So manually go in here, and manually set this zoom for as low a level as you need in order to still get that shake stabilization. I'm going to take it down to 10%. And you see even at 10% we've still got a pretty smooth picture. So this new shake stabilizer adds some really nice improvements to the old basic stabilizer.

In most cases your going to take your shaky camera work and turn into a smooth natural movement. And in some cases, it can remove the movement completely. It's a very nice upgrade to what was already a very powerful editing tool and just an invaluable way to get rid of some of that camera shake in your videos. 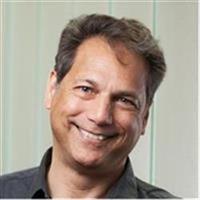 9/25/2015
Adobe has completely overhauled the interface of Premiere Elements 14, and provided performance improvements to handle virtually every consumer video format, from tape-based DV and AVCHD to smartphone and tablet video. But the greatest strength of Premiere Elements remains that it's a surprisingly simple program to get to know—at least once you learn a few basic moves. And it's those basic moves that this series of tutorials is all about.

Join Steve Grisetti as he reviews the basics of editing in Premiere Elements, from adding, splitting, and trimming clips to advanced techniques for color correction, audio, transitions, and text. Plus, learn how to select the best segments from a long clip with the Favorite Moments tool, and use Guided Edit to help speed up your workflow. When the editing is complete, Steve will show how to use the Export and Share workspace to publish your project on DVD or Blu-ray disc or post it online.
Topics include: