Sharing to mobile devices with Revel 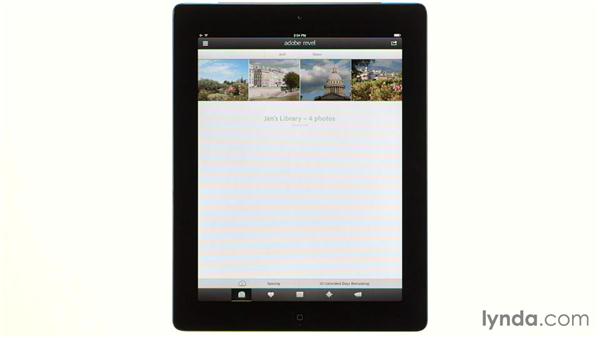 Join Jan Kabili for an in-depth discussion in this video Sharing to mobile devices with Revel, part of Photoshop Elements 12 Essential Training.

Would you like to have access to your Organizer photos, even when you're away from your computer? Mobile albums, here in Elements Organizer, allow you to automatically synchronize photos from your Elements Organizer on your computer to your smart phone, tablet and other mobile devices. And even to the Web. So that you can access your photos no matter where you are. To get that setup in Elements Organizer, I've switched to the flat view of my Folders panel. So that I have access to the Local Albums and Mobile Albums panels. I'll go to the Mobile Albums panel and I'll click the Information button there.

In the window that opens, I'll sign in with my Adobe ID and password. If you don't have an Adobe ID, then click Create an Adobe ID and make one. And of course, I need to be online as I sign in. In the next screen, I'll choose which photos I want to share to my phone or my tablet. All the photos in my Organizer catalog or just those that I select. I'll choose the second option, and then I'll click Next. And, I'm all done setting up to share my mobile albums, so now I'll click Done. That's automatically created Jan's library, my mobile album library, here in the Mobile Albums panel.

This icon means that at this point the photos in my album, are being automatically uploaded to an Adobe service called Revel that's behind the sharing between my devices. Now, let's move from Elements over to my iPad, where I'm going to access an app that ties in to the Revel service. By the way, at the time I'm recording, the Adobe Revel app is available on certain devices, like iPhone, iPad, and windows tablets. That may change by the time that you are viewing this movie. I've gone to the app store and downloaded the Adobe Revel app.

I've signed in to the Adobe Revel app on my iPad with my Adobe ID and now I can see here on my iPad, the same photos that are also available in my Mobile Albums in Elements on my computer. There are several ways to view photos here. I can view photos in this multiple photo view or by album or as a collage, but that's not all. I could actually edit any of these photos. And the edits that I apply here on my iPad, will also appear back in Elements. So I'll select a photo here and then I'll click the Edit button.

From here I can add a preset, I can adjust photo qualities, I can fix red eye and even crop the photo. Let's apply a preset. To commit that change, I'll click the Check mark. And now, let's return to Elements to see what's happened to the photo there. Now we're back in Elements Organizer. In my Mobile Albums panel, I've selected the France book photos, and notice that the change that I made to this photo back in my iPad, now appears here in Elements Organizer as well. And the good news is, that I haven't written over my original photo.

The changed photo has been automatically put into a version set with the original. To see both the photos in the version set, I'll click the arrow to the right of the version set, and there's my original and here's the version that I changed on my iPad. It even automatically has a new name. And this all works in the other direction too, so if I were to make a change to a photo in a Mobile Album here in Elements, that change would automatically show up in the photos on my mobile devices too. Now sometimes you just may want to share an album on the web rather than two mobile devices, and you can use Mobile Albums for that too.

I'll go back to my Mobile Albums panel. I'll hover over that Moble Album France Book photos, and now I see an icon on the right that allows me to share via adoberevel.com, a website. I'll click there. And in the window that pops up, I'll click Start Sharing. In the next window, I can choose to allow visitors to download copies of my album, or I'll just leave that unchecked and click Copy this Link. Now that's going to copy the link to a web album, into the clipboard on my computer. And if I want to share that web link with family or friends, I'll write them an email.

And I'll paste that link into the email and send it off. When the recipients of that email get that link, all they have to do is click on the link and this is what they'll see. Their web browser will open and they'll be able to see and enjoy my France book photos. Using Mobile Albums in Elements and the Revel app on your mobile devices, means you'll always have access to your photos wherever you go. That you'll be able to sync your changes between all your devices and that you'll have a built in way to share your photos with family and friends.