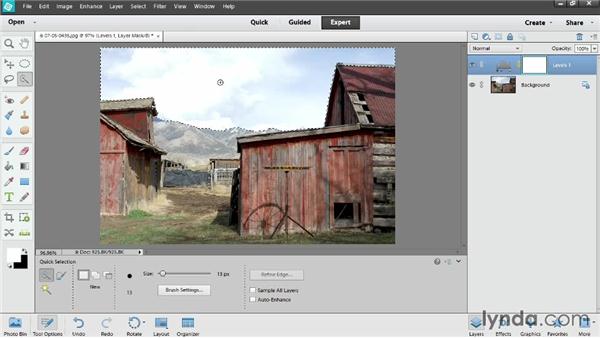 But, I'm interested only in this foreground area, and it doesn't have enough bright areas. So despite the histogram, I'm going to take the White triangle and Drag over to the left until the barn looks good to me. And then I'll do the same with the black triangle. Then I'll take the grey triangle and I'll drag to the left slightly to brighten up the barn. And then I'll close the Adjustments panel. I like the effect of that adjustment on the barn and the other foreground elements, but notice that it's blown out all the detail in the clouds and in the snow-capped mountains.

So let's do that. Now, there are several ways that I could add black paint to this Adjustment layer mask. One way would be to do it with the Brush tool, or I could do it with the Gradient tool as I showed you earlier in the course. In this case, I think the fastest way would be to quickly select the sky and just fill that area of the mask with black. So, lets try that. I'm going to use my Quick Selection tool, and then I'll move over the image and I'll click and drag over the sky. That does a pretty good job of selecting just the sky, and the white capped mountains.

I could spend time refining this selection, but I'm just going to leave it rough for now. And then I'll make sure that I have the layer mask thumbnail on the levels adjustment layer selected. It has a light blue border around it, when it is selected. Then, I'll go to the Edit menu, I'll choose Fill Selection. I'll go to the Use menu in the Fill Layer dialogue box that opens and I'll choose Black. And I'll click OK. That's filled the selected area on the layer mask with black. And that black paint is hiding the levels adjustment from the corresponding areas of the photo.

I'm going to deselect, pressing Ctrl+D on the PC or Cmd+D on the Mac. And that's the result. There's one more thing I want to do. I'd like the adjustment to be only partially visible on the lower parts of the mountains, because they look a little washed out to me. So I'm going to take my Brush tool. I'll make sure that I have black as my foreground color, by clicking this double-pointed arrow. If the foreground color chip is not black and then I'll go to my Brush settings and I'm going to lower the opacity of the brush about half way. Because I have black as my foreground color, lowering the opacity of the brush will allow me to paint with grey on the layer mask.

I'm going to hold the Alt key, the Option key on the Mac, again, and click Back on the layer mask thumbnail to go back to the regular view of the photo. Just to see a before and after I'll click the Eye icon on and off on my Adjustment layer. So that's how the photo looked when we started, and here's the photo with my levels adjustment, applied just to the foreground elements and partially to the lower mountains.