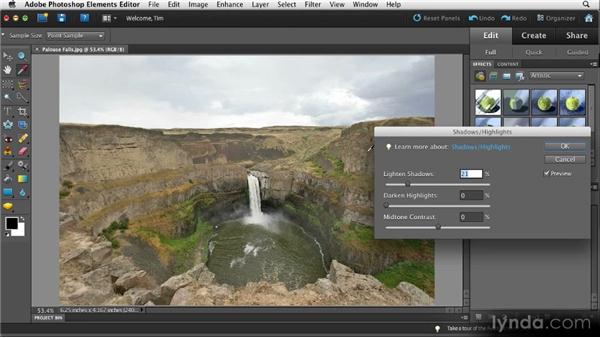 Join Tim Grey for an in-depth discussion in this video Improving shadows and highlights, part of Photoshop Elements 10: Quick Fixes.

The Rolling Farm Country of the Palouse Region of Eastern Washington State has become one of my favorite areas to visit and photograph. On my first visit to the Palouse Region, I was lucky enough to visit the Palouse Falls, shown here, and even though the sky was overcast, allowing for relatively soft light, the result has relatively high contrast. You can see that there's not much detail in the darker shadow areas, and in the bright sky, there's also not a lot of detail. In situations like this you may want to brighten up the shadows and tone down the highlights a little bit, and fortunately it's very easy to apply such an adjustment.

To do so, we'll choose Enhance, followed by Adjust Lighting, and then choose Shadows Highlights. Choosing this option will bring up the Shadows Highlights dialog, and you can see that the default setting with 25% lightening for the shadows causes a relatively significant improvement in the image. Perhaps a little too much, we don't want to open up too much detail, we still want a little bit of contrast and so we might tone down just a little bit on the shadows. But this is purely a matter of preference, you can see if we brighten up the shadows too much, we get a very artificial appearance in the image.

But you can fine tune and look for the value that you think produces the best result. I think I'm going to keep the shadows a little bit dark, I don't want them to be too bright, so right about there seems to be a pretty good adjustment. I can also tone down the bright sky by using the Darken Highlights slider. If I move the slider to the right, you'll see that the bright areas of the image get toned down. In this particular image, I have the falls obviously shown in white, and if I increase the Darken Highlights too much, that water will start to look a bit gray. So, while the sky certainly gets some nice drama to it, I wouldn't want to increase Darken Highlights too much because of the effect on the water. So, I'll moderate this adjustment, perhaps bringing it up to around 25 or 30% I think might work well for this image and then I can consider the Midtone Contrast slider.

By lightening the dark areas and darkening the bright areas, we've obviously reduced overall contrast in the image. That's a good thing overall especially in a high contrast scene, but that can cause a little bit of a flat appearance in the middle tone areas, those values that fall somewhere in between the shadows and the highlights. To improve that situation we can increase the value from midtone contrast. And this will increase contrast in the image, but with an emphasis on the midtones.

In other words, it will leave the shadows relatively light based on our adjustment, and the highlights relatively dark again based on our adjustment. But it will adjust everything in between so that we are in effect improving the appearance of contrast in the image while pulling out more detail in the shadows and the highlights. When you found settings that work well for the image, you can simply click OK and you're all finished.

1/17/2012
Life moves fast, and you can't just press "pause" to get the exact photo you want. Nor is it easy to find a lot of time to fix images after the fact. In this workshop author and expert Tim Grey shows you how to use Adobe Photoshop Elements to make a big impact on your digital photographs in a short time. After getting a quick overview of the Elements interface, learn how to fix problems with lighting, color, noise, and red eye. If you like, you can then move on to explore more advanced techniques like removing unwanted objects from an image, replacing the background, reducing depth of field, and more. This course teaches all the skills you need to create images with staying power.
Topics include: