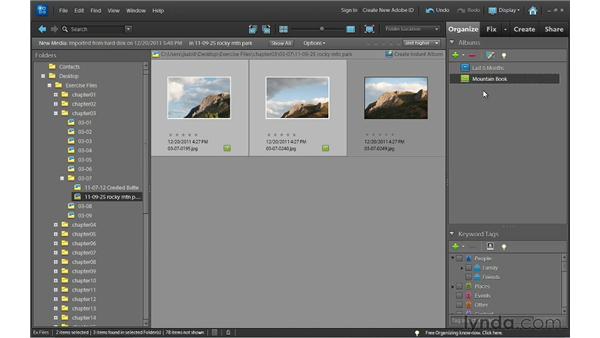 Albums are another powerful way to organize your photos. An album is a virtual grouping of photos. An album doesn't contain actual photos but rather, links to photos wherever they're located on your computer system, and that means that you can include in the same album photos that are physically located in different folders on your computer. It also means that you can have the same photo in more than one album. What kinds of photos might you gather into an album? Well, maybe you want to make an album of all your favorite photos that you shot over time, or you might have an album of photos that you plan to include in a project, like a photo book.

Albums are managed in the Albums panel over here in the Task pane in the Organizer. To create a new album, I'm going to click the green plus symbol here and choose New Album. That switches the Albums panel to show Album Details. I'll give my new album a name by typing a name for it here. This is going to be an album of photos that I want to include in a photo book project and so I'm going to call this Mountain Book. Now, I'm going to add some photos to my album. I'll go to the Media Browser and select some photos holding the Ctrl key that's the Command key on the Mac to select both of these and then dragging them into the Content tab of the Albums panel.

That includes those two photos in this album. Notice that doing that did not move the actual photos on my hard drive. Here in the Folders panel you can see the name of the folder in which these photos are located, and they still appear in that folder here in the Media Browser. I mentioned that I can include in the same album photos from different folders. I'll click on another folder here, which contains photos that I took in a different place, on a different date. And I'll include these photos in the same album, selecting one, Shift+clicking on another to select all in between, and dragging into the Content tab.

From here, I can also delete photos from this album. So, if I decide that I don't want one of these photos--maybe this one--I'll select it, and then I'll go down and click the red minus symbol at the bottom of the Content tab. And that removes that photo from this album, but it does not remove it from my hard drive. That photo is still in this folder, as you can see here in the Media Browser. When I'm done creating an album and populating it with photos, I'll click Done at the bottom of the Albums panel, and that switches the Albums panel back to its regular view.

Here is the new album that I just created, listed in the Albums panel, and those photos in the Media Browser that are included in that album have a green icon. If I hover over that icon, I see that this photo is in the album Mountain Book. This is the photo that I removed from the album, so it doesn't have an Album icon. I'm going to go back and click on that first folder again to show you what happens if I run across another photo that I want to include in my album. To put this photo in my album, I'll click it in Media Browser and drag it on top of the Mountain Book in the Albums panel, and now it's included in this album.

Now that I've made and populated this album, what would I use it for? Well, anytime that I want to see all the photos that I'm gathering for use in my photo book, I can click on this album in the Albums panel and see those photos. So, if I click on the album here, I can see each of the photos that's currently in this album. One of the advantages of putting photos into an album is that you can move them around in the album, which is something that can't be done elsewhere in the Media Browser. If I want to see how the photos are going to look in the project that I'm building--my photo book--I can click on a photo here and drag it to a different spot in this sequence here in the album.

Albums may be easier to find if they are in categories. I'm going to make a new category, into which I'm going to put all of my different book albums as I make them. So, I'll go up to the green plus icon again, and this time I'm going to choose New Album Category. In this window, I'll type a Category Name. I'll call this Books and I'll click OK. Here's my new album category. I can click on this Mountain Book and drag it right on top of the Books category, and now it's indented under Books. And if I were to click this arrow to collapse the Books category, that would save me some space in my Albums panel.

I can expand that category the same way to see the albums it contains. So, now I'm done working on this album and I want to go back to my Media Browser. To do that, I'll go here and click the Show All button. So that's how to make, populate, and use albums. Some people create a new album for each shoot, but I don't like to do that, because then the list of albums in my Albums panel can get really long and unwieldy. Instead, I like to continue to use actual folders to organize my shoots, which I name by date and by subject matter.

And then I use albums to make the kinds of project-based groupings that I've mentioned earlier. If you try using Albums this way, I think you'll benefit from one more level of practical organization that becomes so important as your number of digital photos grows.

3/12/2012
In this course, author Jan Kabili introduces the photo organizing, editing, and sharing features of Adobe Photoshop Elements 10, the less expensive version of Photoshop that’s ideal for casual photographers who want to achieve professional results. The course covers importing, organizing, and finding photos with the Organizer. It explains how and when to use each of the editing workspaces—from the simple Quick Fix and Guided Edit workspaces to the Full Edit workspace for enhancing your photos—including making photo corrections, retouching, compositing images, and adding text. The final chapter offers creative ways to share photos with Elements, including print projects like greeting cards, calendars, and books, emailing photos, and posting them on Facebook and Flickr.
Topics include: