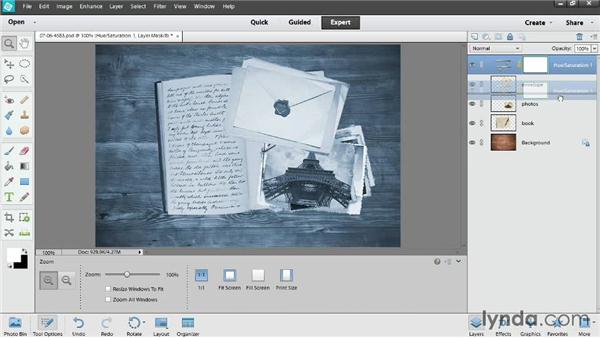 What can you do? Well, the way to do that is to clip the adjustment layer to just the layer that you want to affect. To clip those two layers together, Hue, Saturation, and Photos, I'll hold down the Alt key, that's the Option key on the Mac, and I'll move my cursor over the border between those two layers. Now, you have to look closely at the icon on your cursor. When you see that icon change to these two overlapping circles with a little arrow that you see in my Layers panel, then you can click and that will clip the hue saturation adjustment to the photos layer.

You'll know that those layers are clipped if you see a little bent arrow on the left side of the hue saturation adjustment layer. And you should see in the image that the adjustment is effecting only the content of the photos layer. Down here, in the middle of the collage. So those are some ways to limit the effect of an adjustment layer to just the layers that you want adjusted.