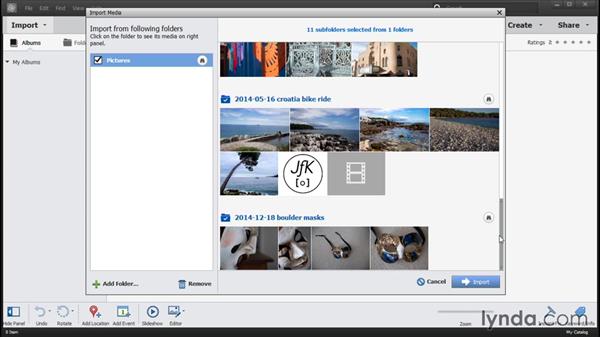 - If you're like me, you probably have lots of existing photos that you've shot digitally or scanned over the years and one of the first things you'll want to do when you start using Elements Organizer to keep track of those photos is to import all your existing photos into your personal Organizer catalog. Adobe has made that easier than ever in Elements 14 by including a new bulk importer. In this movie, I'll show you how to use the bulk importer by importing my own personal photographs into my personal catalog to simulate what you'll be doing with your own files outside of this course.

There are no exercise files for this movie. If you want to follow along, you can do so with your own photographs. So, first of all, I switched from the exercise files catalog we were using in the last movie to my personal catalog. The one that's named My Catalog and you can see that if you look down at the bottom right and I did that, as I showed you earlier in the course by going to the File menu at the top of the Organizer and choosing to Manage Catalogs there and in the Catalog Manager, I selected this catalog, My Catalog, but before I import my existing photos into this catalog, I took some time to organize them a bit.

Let me show you how I organize my photos outside of Elements before I import them. I'm going to go to my Explorer and here you can see in the Pictures folder on my computer that I made a folder called My Elements Photos and I put all the photos into that folder that I want to import into Elements. Now, I even organized them further. If you look inside My Elements Photos folder, you'll see that I have sub-folders organized by year and inside of each year folder I have more sub-folders for each time that I shoot and I named those sub-folders by year, month and day and then with a word or two about the location and the subject matter of the photos in that sub-folder.

Now, you don't have to get this granular in your organization, but I do recommend that you at least get all of your existing photos onto the same drive and into one high-level folder like the folder I called My Elements Photos. So, now I'm going to import My Elements Photos. I'll go back into Elements Organizer. I'll go up to the big Import button at the top left and from that menu I'm going to choose In bulk... a new option in Elements 14. As soon as I do that, the Import Media window opens with just one folder listed in the column on the left, the Pictures folder.

What's happening is that Elements assumes that people store their photos in the Pictures folder in their computer and so it automatically lists the Pictures folder as a folder from which to import using this bulk import method and then it goes through that folder and looks for photos and it lists them in the column on the right. Organizing them in this column simply by their sub-folders. Those sub-folders are not nested. They're just listed here one after the other. So, if I scroll down a bit, you can see that this is a long list of sub-folders, my actual shoot folders.

You don't see my intermediate year folders in this list. Now, what's important about this is you can't go in and selectively import individual photos using this method. So, for example, in this sub-folder I've a couple of items that are not photos. This is a logo and this appears to be a video file. I cannot come in and remove just these items from the list of photos that are going to be imported, but what I could do is remove this entire sub-folder. To do that, I would go to this icon, to the left of the sub-folder name and click there and then the sub-folder name turns gray and that whole sub-folder will not be imported when I import all the other photos that are in my pictures folder.

If I go down to the bottom, I see there are two folders that don't have actual photos in them. So, I'll click the small folder icon on each of those sub-folders so that they're not included in this import and similarly if I didn't want to import any of the photos in the Documents folder I could remove the entire Documents folder from the column on the left by clicking Remove at the bottom of that column, but again, what I cannot do is come in and selectively decide yes or no about individual photos. So, that's what bulk import means.

Now, to quickly get all of these pre-existing photos into my organizer catalog, I'll just click this Import button. Now, if there is a file that is damaged or is in a format that can't be included in the organizer or that is already in the organizer, Elements won't import it and it will tell you here how many photos it found like that that it is not including in this bulk import. I'll just click OK and in just a second you can see, inside of my organizer, thumbnails of each of the photos that were just imported. That's what Last Import means up here.

This is the Last Import view. If I had other photos already in this catalog, I could see them all by click the Back button here. I'll do that anyway and here is the All Media view of the photos that are now here in this catalog. If I want to see the folders that have been imported, I'll go to the column on the left, which by default is set to show albums and I'll click Folders instead. This is the default tree view of the folders panel and it shows just the sub-folders that contain photos rather than a nested view of folders like you may be used to seeing in Explorer or the Finder.

If I click on any one of these sub-folders, over on the right in the media browser I'll see thumbnails of just the photos in that sub-folder and again, to see all the photos in the catalog I'll click All Media. So, that's a look at the bulk import option. A quick and inclusive way to get all your existing photos into the organizer. In other words, you can't select individual photos within a folder to import or not import. If you want to do that there is another method for selectively importing files, which I'll show you in the very next movie.

9/25/2015
Get to know the powerful photo organizing, editing, and sharing features of Adobe Photoshop Elements 14, the complete solution for casual photographers who want to achieve professional results. Elements expert Jan Kabili first shows how to import photos into the Organizer. She then explains how and when to use each of the editing workspaces: Quick Fix, Guided Edit, and Expert Edit. Using Quick Fix, she shows how to crop and straighten photos, correct lighting and color, and apply effects. She also uses the Expert Edit workspace to build a layered file and create composites. Finally, Jan returns to the Organizer, showing how to find and tag photos; organize them by people, places, and events; and share them via email and social media.
Topics include: