Applying transitions: Getting from scene to scene 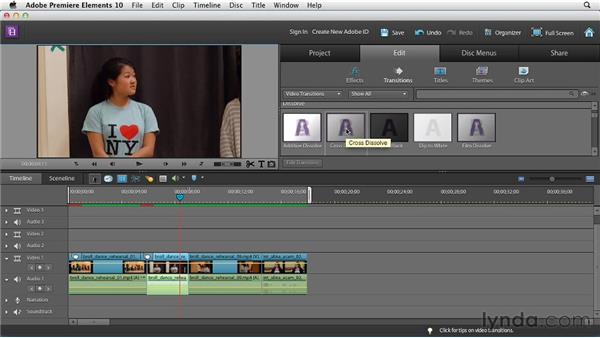 Going from A to B. Transitions are a great way to get there, so let's learn how to do that. But first, what is a transition? Well, a transition could be a fade-in at the beginning of a movie or going from one scene to the next with a cross- dissolve, taking a part of one scene and the other scene and blending them together. It could also be stars taking you from one scene to the other with a starry night. So transitions are a lot of fun and really can help you tell your story. So in our story here we have the girl standing in the corner.

We have her right there, her coach says come in, and now she's dancing. So while this is all nice, I think transitions would make it a lot better. And lastly, what about when the interview comes in? It really doesn't pertain too much to the first three as part of the story, as part of the storyline, but not that little story right here. So I might want to fade to black and then fade in, because it's another instance that's going on here. So let's do this all together. We are going to start at the beginning when they're dancing. So to add a transition I go to Edit > Transitions, and in this dropdown menu I have got Video and Audio Transitions and Plus Member Only, and that's for people that are Plus Members with Adobe.

I can also click in here and type Search and look for a transition by name, if I know the exact name of it. So I have got Video Transition selected and if I look under them, I have got Cube Spins and Flip Overs, all kinds of dissolves, iris transitions where it'll go from one to the other, like in a circle, like in an iris of a lens, Bouncing Cubes, Box Explode. I mean it ships with a lot of transitions that can be a lot of fun. Here's one called Metallic Ice. So play with them, be as creative as you like.

Here is a Wave and a Zoom and a Roll and a Shake, lots of fun. But I don't think any of them pertain to our story. So I am just going to go kind of old school and just go into my Dip to Black. So I am going to select that, drag it down into my footage, the very beginning, and let go. Now if I press play here, it fades from black to them dancing. So I like that, and then I want this to cross-dissolve, going from A to B. So it's taking a little bit of this frame and a little bit of the next frame and blending it together, so I am going to take the cross-dissolve and drag it here in the middle and let go, and we will press play.

And now we dissolve nicely to the girl and she looks at her coach, and we're going to cross-dissolve again, and press play, and there she is, dancing. So it really enhances the story a lot. Now before I get into the interview, I might want to just dip to black and kind of put a bookend to this whole thing. So I am going to select that and put it right there in between the two pieces of footage and if I press play, it goes to that.

So let's just watch this whole thing from the beginning. It fades in, cross-dissolves, cross- dissolves again, and gets ready to fade out. So that's a nice little story. I think that's a great job if I do say so myself. But what if I wanted to make the intro a little more dramatic, like maybe it takes a long time to get going. So I can just click on the transition, which is this little arrow.

It's transitioning from one to the other. That's what the arrow means. I am going to double-click on that, and by doing that it brings up the effect in the Edit tab here. And your timeline might be showing or might not be showing, but we are going to have it showing. And what this is showing me here is that this is the transition right here. It's got a duration of one second. If I expand this a little bit, you can see it's going from A to B. But what if I want to make it a little longer? I can just go here, just like we moved footage in the Timeline, click and drag, go out a few more seconds, and now let go.

Let's come back to the Timeline here, press play, and it's a little longer. So as you see down here as well, if I press Command+Z to undo, it goes back to the area here that it started with. I am going to redo that because I like slow intro. And now if I want to go a little longer on the girl here, I can do that as well. So I might double-click there and on cross-dissolves, you have two sides.

So maybe I want to come in a little bit there and drag it a little bit more there. Once again, the icon shows you that, the in and the out, but what if I want to move the whole transition? I can see these black marks right here, and I can click and hold and drag the whole transition. So it's very, very customizable. And we will go back and press play, and there we go. So as you can see, transitions can enhance your scenes and make your movie look very professional. 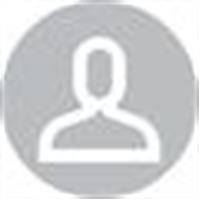 1/31/2012
Premiere Elements 10 Essential Training breaks down the editing workflow into bite-sized pieces, covering everything from setting up a project to exporting the final video to any format. Author David Basulto introduces the basics of editing in Adobe Premiere Elements as well as the advanced features like picture-in-picture overlays and audio and visual effects.
Topics include:

Video: Applying transitions: Getting from scene to scene