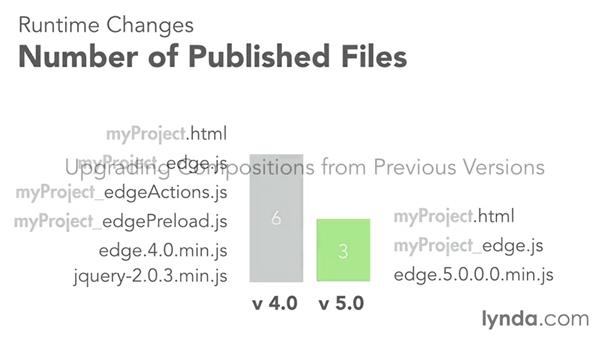 Now this doesn't mean that you can't use jquery if you want to, or other frameworks. What this does mean is that if you simply go into Edge Animate, create a brand new project, create some animations and publish it, you only need this one file to render your composition. Now another big change is when you publish your files. In earlier versions of Edge Animate, we had an edge.js, an edgeActions.js and an edgePreload.js. All of these were published as separate JavaScript files, increasing the total number of files that needed to be requested to play your composition.

Now when we publish our files with version 5, the edgeActions and the Preload functions will be combined into the simple edge.js file. So now we'll have three files instead of six. Now with these changes to the runtime, if we open a previous project that we created with an earlier version of Edge Animate, this new version will duplicate that entire project into a new folder and then restructure the contents. Now in our new project folder, we'll still have an edge_includes directory, which will have a copy of the edge version 5 framework. The HTML and edge.js files will be moved over as well, and the jquery fill will be moved out of the edge_includes directory and into a new directory named js.

This will follow the workflow as if we had taken the jquery file and imported it using the library panel inside of Edge Animate. So again, your previous project will remain untouched. Edge Animate version 5 will take all of the files from the previous project, put it into a new folder, and structure it like this, giving us the ability to optimize a previously built project using the new runtime. Another major change is in the publish settings. If I have a project open inside of Edge Animate, I come up to the File menu, come down to Publish Settings. Under the Web category here, we can see that we can now define individual folders up to two levels above the working directory for images, audio, video and scripts.

So if there's a certain folder structure that you have in place for an existing website, and you need your Edge Animate composition to look in the proper folder structure, you can now set individual paths for all of these media types. We'll explore the details of this new feature in the chapter on publishing.