What does Edge Animate create? 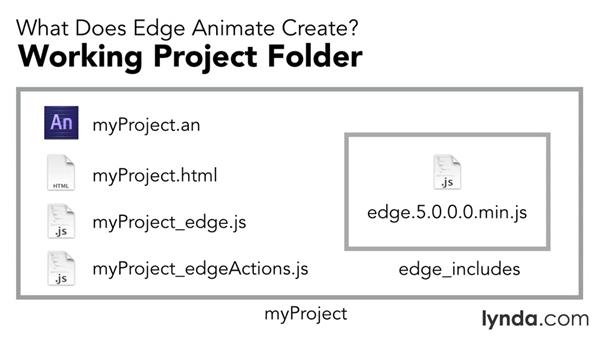 Join Chris Converse for an in-depth discussion in this video What does Edge Animate create?, part of Edge Animate Essential Training.

- I want to spend a minute in this video talking about the files that Edge Animate creates. When we're working inside of an Edge Animate project, the main stage area here in the center will show that we're looking at a file called myProject.html. So while we're working inside of Edge Animate, this HTML file is used to populate the stage. And now, in addition to this HTML file, Edge Animate needs to create a series of JavaScript files in order to create our animations and compositions, and those files will be revealed to us in a working folder when we come up to the File menu and choose Save, so I want to talk about the files that Edge Animate's gonna create.

Now, in addition to these four files, we'll also get a folder called edge_includes, and inside of that folder we're gonna get a copy of the Edge Animate framework. Now if you have other assets in your composition, such as images, audio or video, you'll see additional folders inside of here, but here I just want to simply show what you would get if we made an Edge Animate composition, and simply hit Save. Now as I mentioned before, we are looking at the working project folder, which contains a copy of the Edge Animate file, and we also have edge and edgeActions that correspond to that file.

Now when we publish our work from Edge Animate, we'll get another folder inside of our working directory called Publish, and inside of there we have three choices for publishing our project. The first choice is to publish our project for use on the web. Now in that web folder, we won't have a copy of the Edge Animate document, and Edge Animate will also combine the JavaScript that's inside of the edge and edgeActions files into one single file to reduce the number of files that need to be downloaded, so the five files we had originally in our working folder are now down to three.

The second publishing option is called an animation deployment package or an OAM file. This is basically a zip archive that contains all of the same files in the web folder, just in one compressed file, and we can use this file in other Adobe applications such as Muse, Dreamweaver and InDesign. And the third option gives us the ability to package all of those same files into a .wdgt format, which is actually a folder with that extension added to the name which makes this compatible for the OS X dashboard on the Macintosh, or for use directly in iBooks Author to create an iBook for iPad.

Now we'll talk more about the publishing options later on in this course, but as we're working through our individual projects, I just want you to be aware of all of the individual files that we'll have that are associated to our single Edge Animate project.

Video: What does Edge Animate create?