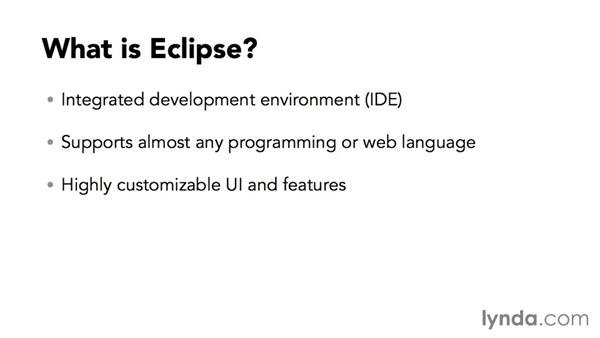 Join Todd Perkins for an in-depth discussion in this video What is Eclipse?, part of Eclipse Essential Training.

- So what is Eclipse? Eclipse is an integrated development environment, also known as an IDE. It's mostly used for Java development, but it's also a great tool for many other programming languages. In fact, Eclipse can be extended to support just about any language you can think of. In this course, we're going to look at several of those languages, including of course, Java, PHP, Perl, Python, and C, C++.

Eclipse has a highly customizable UI. You can control which features are on the screen, and which are not, including which ones are in the tool bars and the menus. You can lay out your panels however you'd like, and you can have unique sets of layouts for each language that you work in. Eclipse also supports source control solutions including Git, which we'll look at in this course. Finally, Eclipse has a large active community of developers.

What that means is that bugs get fixed, plug-ins get updated, and help is readily available should you need it. So we'll start looking at Eclipse in this chapter by going through how to create your first Eclipse project, and some of these features I just mentioned, including customizing your Eclipse environment.

7/14/2015
Eclipse is an industry-standard IDE and a critical tool for developers who want to build projects in multiple languages. In this course, Todd Perkins shows how to effectively use Eclipse's built-in tools and extensions to create, code, test, and debug projects in Java, PHP, C/C++, Perl, and Python. He'll show how to adapt the Eclipse workflow to the nuances of each language, and integrate with Git for version control. By the end of the course, developers will be able to wield all of Eclipse's most essential features with confidence.
Topics include:

A: New videos were added that cover Java 9, Java 10, and PHP features in Eclipse 4.8. Plus, learn how to use Eclipse for Rust development.

Video: What is Eclipse?