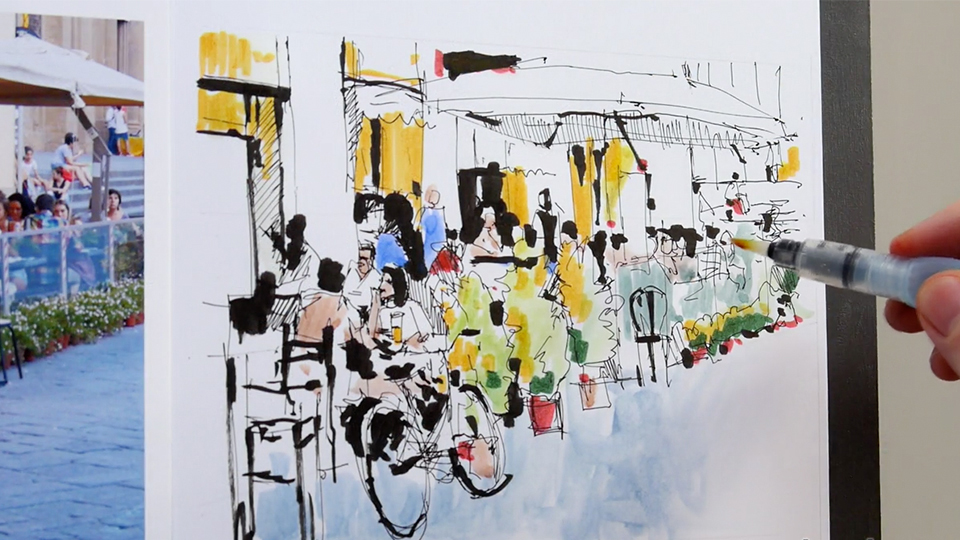 (piano music) - Now what I would want to do is introduce movement of real life and energy. And this comes from adding different elements of street furniture, but also adding figures. And when we add figures into our sketches, it can bring them to life. We've got that foundation of the buildings behind us, we can add a few little elements of street furniture, and then a little blast of energy from a figure, and your drawings will really come together.

Often, you're trying to capture a figure in a really small window of time before the subject moves. So, here's a couple of little two minute sketches I did having a coffee in a farm shop, and you can see the underlying straight lines to the figures where I quickly got the gesture and body position in, and then when I was happy with that, I added grey tones to give a sense of the space, and then finally refined the edges with the curves.

So, we're going to start from a seated lone figure and then work up to some quick sketch techniques to create realistic impressions of moving people, and then how to effectively draw groups. This is often a combination I'm looking for where I've got the organic shapes of a figure, and I've also got strong architectural lines in the furniture or the structures that are around the figure. And this always helps give you a good contrast, and it also gives you something when you first start your drawing to get the drawing in of the objects that aren't going to move, and then you can spend more time drawing a quicker sketch of the figure when you've got that movement element.

What's always so nice about this is 'cause we've got the strong light coming here from the left hand side, and you've got the great shape of the hat. It adds a really lovely contrast that you can work with in the sketch. So, I'm going to be using the MUJI null point five pen, and then I'm going to be using a warm grey just for some of these tonal areas, just so I can quickly block in the tone, especially on the white of the t-shirt, then I might add a bit of color later just with a sepia ink.

So, once I've established the straight lines, I'm looking for elements that have more circular organic shapes. So, these flowers just on the table act as a nice contrast to the straighter lines in the rest of the drawing.

I start to introduce some grey tones, and I'm using the light grey number three, this is the Faber-Castell pen, and I sketch in the shadow tones of both the skin and the t-shirt. So, I'm just looking at the drawing as if it was just purely in black and white, I'm not worried about color to start with. And you'll see these little grey tones, these small dashes all around the drawing. And what that helps to do is connect the main focus to the background, albeit, in a really subtle way.

But just having those little dashes of the grey around just helps bring the view's eye around your sketch. I can now work with the black fiber tip Faber-Castell pen, and this introduces the dark accents.

And then having this darker tone, I can push the contrast in the shadows more. And it starts to give me this three tone drawing. So, I've got the darks from the black pen, the mids from the cool grey, and the lights from the white of the paper.

Swapped back to the fine line pen to refine some of the details in the profile of the face. And then I can just use it to draw in just an indication of the hand, I'm not going too detailed, just an odd little indication of where the hand actually is within the body position.

I then use the brush pen and work really quickly with it to do these fast lines, and this just gives me a broken line. So, I've got all the elements of the broken line, and then elements with the fiber tip pen, which are a straighter edge to them. And it's nice just to have that little contrast between the garments. What I've got here is a bit of fountain pen ink, and you don't always have to use it in the pen, I'm just gonna use a sable brush and just, this is a burnt sienna, and then you can just slowly blush on to get that nice warmth. 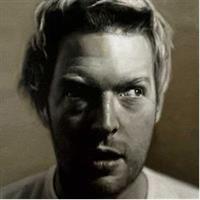 11/2/2015
You don't need to drive out to the country to draw from life. From an artistic point of view, urban settings have just as much appeal. This Foundations of Drawing course shows how observing everyday life can give you an eye-opening appreciation for cities and towns and their surroundings (from the view out of a bus window to a half-built construction site). Will Kemp, founder of the Will Kemp Art School, demonstrates how to create frameworks for successful sketches using freehand vertical lines, perspective, and tonal blocks. Lessons follow a logical progression, from sketching static buildings and monuments to capturing the movement of individual figures and bustling crowds. The course will enable artists to practice their drawing skills and create fast, bold urban sketches with pencils, pens, or watercolors—whatever tools they have on hand.
Topics include: