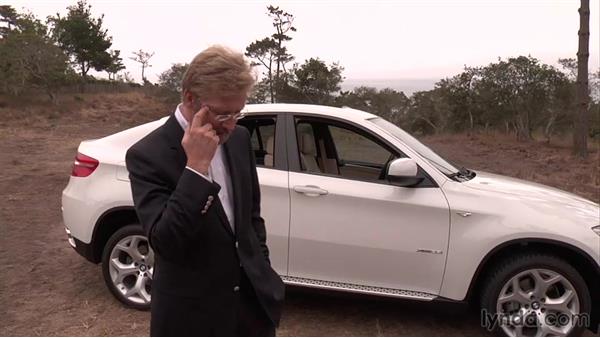 - Exterior car design is a little bit like painting a gorgeous painting, and then having people come in and chop it up into a puzzle and maybe take a puzzle piece out and you have to really work hard to make sure that the painting stays integrated to its original idea; whereas interior design is often working with a lot of desperate puzzle pieces and you have one picture in your mind that you want them to come together but you have to use a lot of technical elements to make it happen like that. It's a very complex object, the interior of a car. Most of the safety elements that are most intimate to the passengers and the driver, are located here, right around me.

RIght around me are airbags and explosives and seat belt retractors, and knee crash bags and everything else, and in particular, A-Pillar crash elements; everything that hopefully can be thought of, to maintain a safe environment, should you have the misfortune to be in an accident. And, all of those have extremely tight technical parameters, which have to be maintained, and despite that it has to have one elegant look. And, among these issues is the whole issue of orientation to the driver, of the user interface, which is mostly focused on the person doing the driving.

It's much more complex, than let's say, flying an airplane, in that sense. In an airplane, you actually can take your eyes off the sky for awhile; in a car you can't. Within milliseconds, this car is gone on its own in a different direction, than where you intended it, so you basically want to , keep the guy's eyes up there and you would like to keep his hands on the steering wheel as much as you can; which means you tend to orient things around here, put some buttons on the steering wheel if you can, which starts to get rather complex, because that's also one of the crash zones, so you've got to be a little bit careful about that. And, perhaps swing some of the other elements so that it makes them a little bit easier to reach, and as cars become more and more complex, we have to add things to this interface, like heads up displays, like the control-ability of navigation, of the entertainment interface, so that it can all happen, and still you have your eyes on the road.

This car is a crossover coup which means it uses elements from let's say, a sports activity vehicle, four-wheel drive, sits up high, look, I can look down at everybody, but also the idea of a sporty coupe. Sit down, low window line, you can't see me, but (whistles), I just went by you. Those elements mixed together make a sport activity coupe, the fact is though, because of this high-dimension, the large wheels on it, the short overhangs, you have a vehicle which has an enormous amount of tension built into it. The gesture of the car, which is an important thing to understand, is it's not just proportions.

Proportions, service detail, that's how you go through the various cars from a distance, you look at the proportions first, then you look at the surfacing, then you look at the details, but involved in that is also an understanding of the gesture. Is it a car which is aggressive? is it a car which is stopping like this, on its tracks? It's just something we've all come to learn. We read it in body language, we read it in film, we see it in cartoons, we see it everywhere. And this car has an enormous amount of pounds. When you see it, kind of in the front three-quarter, if you come around here, always gives me the sensation that it's like a big cat, that just got its prey, and it's kind of "You're going to take what away from me?" You know, that kind of look.

Because it's got a huge amount of tortion around the center axis which comes down on the front. Super short overhangs of course, make that happen. It's a tall car, so that when it's coming up behind you in the rear view mirror, you understand that in fact there is a rather large vehicle coming at you, but at the same time, it's a very aerodynamic car, so all that tallness doesn't really impact negatively on the consumption. It's actually quite efficient. So, all these come together into a design which is very, very dynamic; huge amount of muscle into it. We moved the wheels out as far as we possibly could, let the muscles in the wheel arches do the talking for us, so that everybody knows it's got some power to spare.

It's got a brand new set of engines in it, so stuff like that really have to come through in the body, and this is where I mean the authenticity and integrity to the spirit that's underneath is very important, so when people see it they know okay, it's that kind of an animal. And, when you're in it, you know that you're reflecting to the outside world , "I have this under control", which is a very important thing, it's not just "This is me." It's also, "I have this under control. It obeys me."

7/18/2014
On an average day, each of us uses hundreds of objects. (Don't believe it? Start counting: alarm clock, light switch, faucet, shampoo bottle, toothbrush, razor…) But who makes all these things, and why do they look and feel the way they do? How can good design make objects, and our lives, better?

Objectified is a documentary about industrial design; it's about the manufactured objects we surround ourselves with, and the people who make them. Gary Hustwit, the director of Helvetica, talks with Dieter Rams, Marc Newson, Jonathan Ive, and other renowned designers behind some of the world's most iconic products. lynda.com is proud to offer this film to our members, along with over one hour of online-exclusive bonus movies.