- [Instructor] Now that we've got the Docker flow in mind … let's talk about running things in Docker … 'cause that's what it's all about. … So to start off … we have the most important command, docker run. … We've been using it a whole lot … but haven't really talked about it. … Docker run starts a container by giving an image name … and a process to run in that container. … This is the main process to a container. … When that process exits, the container's done. … The container's not done till that process exits. … If you start other processes in a container later … which we'll cover, the container still exits … when that main process finishes. … So Docker containers have one main process … and they can have names. … If you don't give it a name it'll make one up. … Let's take a look at that. … So if I run docker run … just like the example we've been using a lot. … I'm going to throw in some extra arguments … we haven't used before. … So I'm going to throw in the dash dash rm. … This is a very common command. … 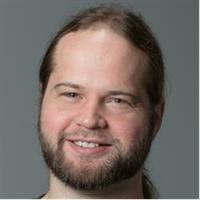