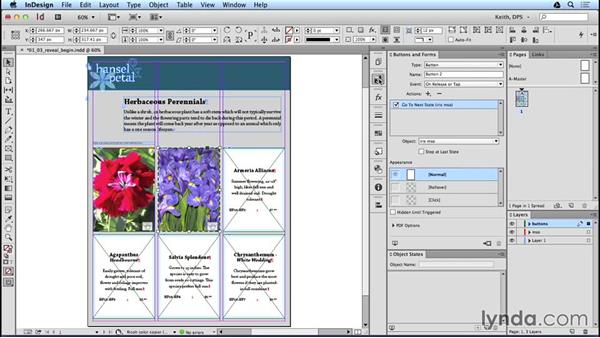 - In this video, we're going to create an effect that you see quite often. A grid of images that when you tap an image, the image disappears and information about the image appears in it's place. For this example, we're going to give the user the ability to reveal more than one object at a time. So to begin, in this example, I've got two layers just for clarity and the MSO layer right now just has six text frames on it. These are the text frames that I want to appear when the user taps one of the flower images.

And then I'm going to select this frame and assign the go to next state action. But it's important that I choose, in this case, the iris MSO multi state object. So this is why I want to name my states very clearly, so I can tell which one's which. So let's see if this works on our iPad. So if we go to the folio overlays panel, go to preview, and preview that on my iPad, make sure that it works before we do this four more times for the other multi state objects.

So here we go, if I tap the dianthus, it shows me information about that one. If I tap the iris, I get that information. I can close either one of them also. Of course the other four don't work because I haven't wired them up yet. So back in InDesign, I just want to talk for just a moment about how you could quickly replicate this now to the remaining four. To replicate this four more times, I need to first make four more multi state objects. And then I need to make those multi state objects vector, and then I need to wire up the four different buttons.

And then after I'm done with that for all of the objects, I would then select this first one and go and make it vector. Then I would select the second one and go and make it vector, et cetera. The reason for that is it's just easier to do the same thing over and over again, than to remember a complex series of steps and have to do that over and over again to individual objects. The last little tip I want to give you about this is if I reveal my buttons layer, last thing that I would do is I would select this and assign a button action to it.

And the reason for that is because I have to pick this go to next state action four times in a row here, for four different buttons. I get tired of going all the way up here and choosing that action over and over again. I might have four, eight, 10, 20 different buttons that I need to wire up that way. So taking a few moments to set up a keyboard shortcut for that is well worth doing in my opinion. So that's it. You now know how to replicate that to the rest of the buttons and you should be able to do that yourself. This method that allows multiple objects to be revealed at the same time on the screen works well as long as the objects don't overlap, but sometimes tight quarters, such as revealing a lot of information on a small map, for example, dictates that you want one box to automatically close when another is opened.

We'll see how to do this in the next video.

11/12/2014
Migrated to digital publishing? Don't stop there. These techniques will help you add engaging, immersive interactions and media to your Adobe Digital Publishing Suite projects. Author Keith Gilbert covers buttons, nested multistate objects, interactive quizzes, video, animation, and embedded PDFs. Plus, learn to create vertical and horizontal scrolling frames and interactive panoramas. Each chapter begins with examples that show the effects in action, so you can see how these techniques are used in the real world.
Topics include:

Q: After following along with the movie "Embedding a PDF in an article," I am not able to preview the PDF using the button within the folio, as shown. I receive a URL error message ("cannot open this page"). How do I fix the link to the PDF?

A: There is an error in this video. Instead of zipping the HTML resources folder itself, you need to zip compress the contents of that folder. Next, rename the zipped file to “HTMLResources.zip” exactly (the name is case-sensitive).

Now when you import the zip file into your folio, and preview it in Content Viewer, it should work.