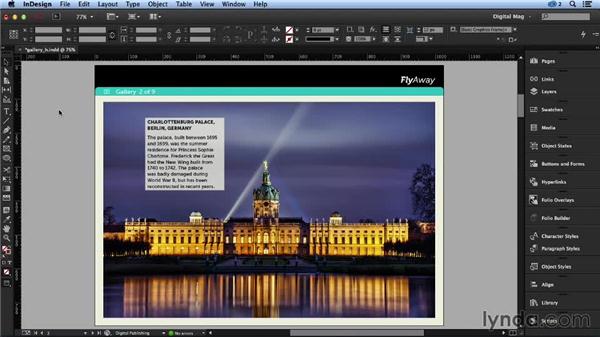 I'm now going to make a slideshow that allows the viewer to tap. To show and hide the caption. You'll remember from an earlier step, that we set up this document to look like this. Let's take a look at the finished version. If we view it in the desktop Content Viewer. I can click to show the caption. Click again to hide the caption. Now, my content viewer is currently at 75% view in order to fit on my screen, and that's the reason that the title looks very pixellated and rough there, but it looks absolutely fine and crisp, when viewed on a tablet.

So before we do that, I do need to do some housekeeping here. We have all of this text, as one continuously flowing story. So this is a legacy of how we began this whole project, keeping everything as a continuous text flow. And in the early stages, that was very helpful. And it allowed us to. Swiftly apply the formats to all of our text, but now, it's going to be a hinderance to us, because as soon as we stop working with multi-state objects, having continuously flowing text is not going to work.

So, I'm going to nip this in the bud and come and use a Script. I'll tear off my Scripts panel, close that, we'll park the scripts panel down here, and then I'll open it and I want to look at the samples, because in the JavaScript samples, well in both, but I'm going to use the JavaScript sample. There is a script. Called split story which is just what we want in this case. Couldn't have used it any earlier, because we didn't want everything split.

But we do want everything that is in this document to be split. So with the story selected I'll double-click on Split Story, and we now see that each of these text frames. Is it's own independent story. When I turn on my Hidden Characters, and also Show my guides, we can see that it's also. Introduced an unnecessary paragraph mark, while it was necessary to keep the text frames separate.

But it's unnecessary for us now, because it's adding extra space, at the bottom of each of these text frames. So the next thing I'm going to do, is a find change routine. Cmd or Ctrl+F. And I'm going to remove trailing white space. I'm going to do this in the whole document, and that addresses that problem. Okay, now that we've got that done, we're ready to move on to. Create the multi-state objects. Let's start with the first page, or the first gallery page.

And I'll just hide my guides, so that we don't have that visual distraction. And then I'll select those two items. Picture and Caption. I'll come to the Object States panel. I want to make this into a multi-state object, so when I do that, it's not going to give me the result I want because, it's going to take one item and make it state one, and the other item and make it state two. Am going to undo that, and now, what I'm going to do is exactly the same thing but, holding down the Option or the Alt key.

And this doesn't give me the result that I want either, but it's a lot closer. I now have both items on both states, so on state one, I need to double-click to select the caption and delete it. If you reselect the multi-state object, state one has no caption. State two has the caption. So I'm going to do this now, for the next page. I won't do all eight, but I'll do one other. Select the two, hold down the optional Alt key, convert that to a multi-state object, double-click on the caption on state one, and delete it.

Now what we need to do, to take advantage of that multi-state object, is add an invisible button. And this invisible button needs, to cover the whole of the image. And to cut down on the repetitive work, I know I've only done two, but I will be going on to do eight, I'm going to add this, to the master page. So I am going to come to my Emaster, make sure that I am on my Interactive Layer, tap F for my frame tool, and drag a frame over the whole of the page with it still selected, I'll come to Buttons and Forms, and I am going to add an action to it, which will convert it to a button.

The action that I want is Go To Next State. When I do that, there's no multi-state object available for me to choose, because there is no multi-state object on the master page. But that's okay. What I'm going to do now, is switch to My document page. I'll turn on my Guides so we can see the red dotted outline, of that invisible button that I added. Alt+Cmd+Shift. Click on that. That will unlock it, and then come to Buttons and Forms> Go To Next State.

And now I specify which multi-state objects I'm referring to. In this case, multi-state one, and then I repeat that for the second page. Cmd+Shift-Click. And in this case, that's multi-state two, etc. So, let's just see if that's worked. I will save it. Come to my Folio Builder, and click on Gallery, and we'll preview that in the Desktop Viewer. So I'll swipe to the first page. Tap to view the caption. Tap to hide the caption.

5/16/2014
Designing for a digital magazine is similar to designing for a print magazine, but there are additional choices that you need to consider. Interactivity is important, but making it easy to read and navigate is even more critical. In this course, Nigel French covers how to use InDesign's digital publishing toolset to create a magazine for the iPad. He shows you how to add interactivity in the form of slideshows, maps, and audio and video. Plus, learn how to convert the project into a single edition iOS app.
Topics include: