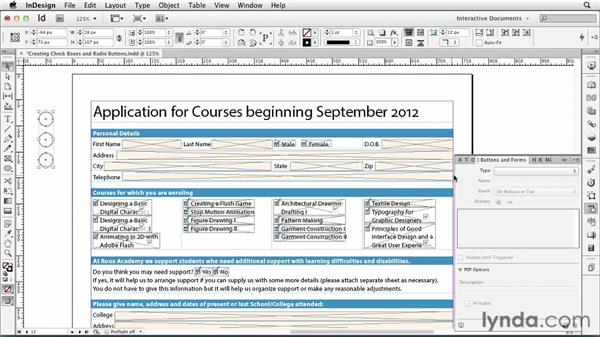 Check boxes are buttons in a form that the user can click to make a selection. So these buttons are either checked or unchecked, on or off, but we can define appearances for other states as well. For example, when the user rolls over the check box it can change its appearance. I can start with any frame so I'll just draw out a new frame, and in the Buttons and Forms panel I'll check Type > Check Box. And when I do, the frame that I started with is grouped with a check mark that fits inside of it, and I have Appearance options inside the Buttons and Forms panel.

I can set upto six different appearances for the check box. These will determine how the check box looks when the PDF user interacts with it. For example, there are states for Normal, when the user is not interacting with the check box, Rollover; when the user rolls their cursor over it, and Click for when they click it. And since a check box can be either on or off when the user does those things, there are on and off versions of Normal, Rollover and Click, making for six potential appearances in all. In this form I set check boxes for each of the courses, so the person can indicate which ones they want to enroll in.

And notice that I made the check boxes really large so that they cover the entire course name. That gives the user a nice big place to click, not just this little tiny check box. The way that I did that is I double- clicked on the check box and I just dragged out the frame. The other kind of form object we're going to look at in this movie is a radio button and it acts basically like a group of check boxes that are related to one another. Only one of the check boxes in the group can be selected at any time. On my pasteboard I'll just delete that check box and I'll press the L key on my keyboard to get my Ellipse tool, and I'll drag out a little circle.

I'll hold Option or Alt and drag down couple times to make three of these. I'll select them all and in the Buttons and Forms panel I'll choose Radio Button. Same as with the check box there are six appearance states that you can set for a radio button to control what it looks like in the PDF when the user interacts with it. So for each of these I can select Normal on or off, Rollover on/off and Click on/off. Also with both check boxes and Radio buttons you don't have been draw them from scratch, you can choose from the Panel menu in the Sample Buttons and Forms library.

Of course, you can also tweak any of those to make them look the way you want to. In this form I set up radio buttons for things like Male and Female, Yes and No, where I wanted people to make just one choice. These two objects are radio button and these too. Also I want to say a couple of words about the way your form objects will appear in Acrobat or Reader. For things like text fields, combo boxes, list boxes, and signature fields, don't bother with any fancy formatting in InDesign. Only the solid stroke and the solid fill color will get passed into the PDF.

No drop shadows or other effects, no stroke styles, no gradient fills, and so on. Also don't bother with trying to customize the font used inside any of these objects. InDesign isn't going to pass that information on to the PDF, so you're going end up with the Acrobat default font anyway. Now let's export this to PDF and take a look at the form to see the check boxes and radio buttons in action. I'll export it to my Desktop, call it Checkboxes, and I'll export the page with the form.