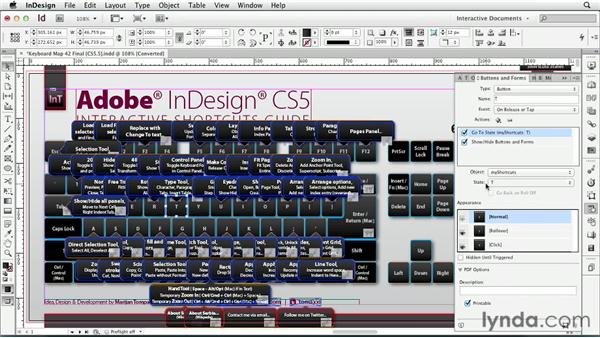 A terrific example of what you can create with InDesign's interactive features is Marijan Tompa's interactive shortcuts guide for InDesign CS5. You can find it at his web site tomaxxi.com. This is a comprehensive guide to all of the keyboard shortcuts for InDesign, for both Mac and PC, packaged in an attractive and really fun-to-use, interactive experience. If you like using InDesign, you may start exploring here and find yourself wanting to keep going and learning more and more, because it's so easy to use and so well designed. The guide is in the form of an animated keyboard that reveals all of InDesign's keyboard shortcuts as you interact with each key.

So as you roll over a key, you see a pop-up describing the most-used functions associated with that key, and when you roll off, the pop-up disappears. When you click on a key, you see all the shortcuts that used that key displayed in the table, and you can close this table by clicking the X. For some keys, there's more information than can fit on one window, so there are buttons in the bottom and right to go to the next page. So, for example, Up has two pages. I can go to page 2 or back to page 1, and close it. There are also buttons to email Marijan, to follow him on Twitter, to learn about where he lives, and to go to his web site.

There is also an About page and even a Quick Start Guide. Now what we're looking at here is a SWF file that was exported from InDesign. It's also available as a stand-alone AIR application you can download and run from your computer. But the key point is that no other program was used to create the interactivity in the SWF file--no Photoshop, no Illustrator, no Flash--just pure InDesign, and Marijan was kind enough to share his original InDesign file with me. We'll switch over to InDesign and take a look at that, and when I poke around inside the file, I can see just how he accomplished all that slick interactivity.

You can see right away there is a lot of elements here, but let's just take one and see how it works. So, if I select the T key and I go over to my Buttons and Forms panel, I can see that this is a button with the name T and the event On Release or Tap has two actions. The first one is Go To State of a multi-state object called myShortcuts and go to State T. So if I select that multi-state object and go to my Object States panel, I can see that there are states for every single key, and this is what provides us those pop-up menus. So I'll scroll all the way down till I find T and show that state, and there we can see the key explanation.

I'll scroll back up and go to the blank state, and we'll go back to the Buttons and Forms panel. So there's another action also, which is Show/Hide Buttons and Forms, and this will just show the myClose button, which is this one right here. The myClose button will go to the blank state of the multi-state object, basically resetting the keyboard to its original appearance. The T key also has more events. So on rollover, it will play an animation, the T_info Animation, and it will reverse it on rolloff, and this object right above is what's animated. You can see the motion path coming down and I'll go to the Animation panel, T_info, Fly in from Top, On Roll Over.

We can see the animation takes half a second. It's going to animate to its current location, it's going to fade in, and it's hidden until the animation starts. All in all, it's a very well- thought-out and well-executed plan. Marijan described the workflow he used on his web site. He started by collecting all the information for his guide, all the keyboard shortcuts for both Mac and PC, and then he designed the layout and the appearance of all the keys and pop-ups. Then he created object styles to apply to each of the keys for three states-- Normal, Over, and Click--and then he input all the shortcut information into tables and used a script to merge those pages into multi-state objects.

Then he assigned every key to a multi- state object state and finally exported the whole thing to SWF. Now you might be wondering if there's some kind of trickery here because a script was used, but the script just help speed things up, because there were so much content to deal with and Marijan happens to be an expert scripter. So it just made sense for him to do it that way to save time and effort, but you could still do everything to make a project like this without the aid of a script; it would just take longer. In any case, it's a truly impressive piece of work. Tomoxxi's interactive shortcuts guide is a terrific example of how much interactivity you can pack into a document created with InDesign.