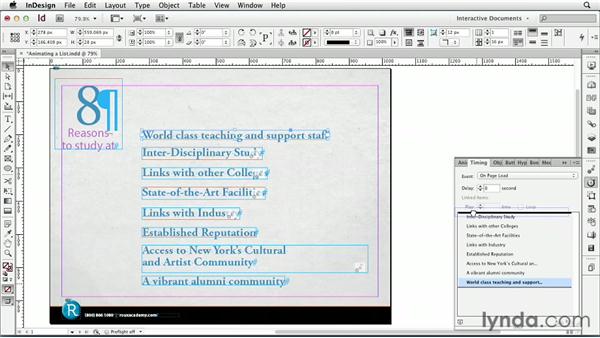 By default, animations will play On Page Load and they'll follow the order in which they were created. And that might be fine in some situations, but more often you're going to want to exert some control over the order and timing of animations, and for that we can use events and the Timing panel. Here I have a presentation slide listing the 8 reasons that it's great to study at the Roux Academy. And I'd like to animate this list so the items appear one-by-one, and for that I need them to each be in separate text frames. If they're all in one text frame, I'd need to cut and paste the text into eight different frames and that's exactly what I did here.

So I'll select all eight frames with my Selection tool, and I'll go to my Animations panel, and from the Preset menu I'll choose Fade In. And now I'll preview the page, they come in one -by-one, but there's a problem in the middle. The State-of-the-Art Facilities comes in last. Why is that? InDesign isn't using the arrangement of frames on the page to determine the order of animations. It's using the order in which these frames were created.

And when I made this list, I forgot the State-of-the-Art Facilities. So when I remembered it, I added the frame for that and moved it into position, but you can't fool InDesign. It still knows that that was the last frame created, so that animation plays last. Now I need to fix that, and I'll fix that in the Timing panel. Here I can see all the different animations, and sure enough, State-of-the-Art Facilities is last. So I need to put that forth and now I'll preview again, and now it plays in the order that I want.

The idea that timing is tied to the order of frame creation is important to always be aware of, since you will disrupt the timing of animations by doing things like cutting and pasting frames. For example, if I cut the first frame and paste it in place and preview the animation again, that first item now plays last. Again, to fix it, I can just go to the Timing panel and drag it to the top of the order.

Another useful thing I can do with the Timing panel is to set delays. If I was going to be talking over these points as they appear, then I might want to slow them down a bit, and for that I can select them and apply Delay, and by default the Delay is set to 0, which makes each animation play immediately after the one preceding it. I'll select all the animations and change the Delay to one second, and preview again. And now you can see there's a slight pause in between each item appearing.

But what if you were presenting this slide and you wanted to explain each of these reasons as they appeared. You don't know exactly how long it's going to take for each one, so to make the timing of the animations fit your narration, you need to have control, so you can trigger each animation exactly when you want it during the presentation, and for that you need to change the events. I'll go to the Animations panel, and for each animation I can see the Event is set to On Page Load. So as soon as this page loads, the animations will start and they'll keep going until they're done.

I'm going to select all the animations, and change it to On Page Click. Notice that it didn't take away On Page Load, so I have to go again to the Events menu and turn off On Page Load. Now On Page Click is the only event that will trigger these animations. Let's preview again. The slide appears but none of the reasons will appear until I click. So I can talk over each point for as long as I want, and then move on to the next one. Looks like I need to fix some of the order there.

Let's go back to the Timing, I'll move world class teaching and support staff back up to the top, where it belongs, and State-of-the-Art Facilities fourth again. Now let's preview. And they all appear as I want them to. Animating a list in a presentation can make it more interesting for people to read. It can also help you control the speed and delivery of the information to help your audience better understand it. The Timing panel and the Events menu in the Animation panel are your tools for customizing the order and triggers for your animations.