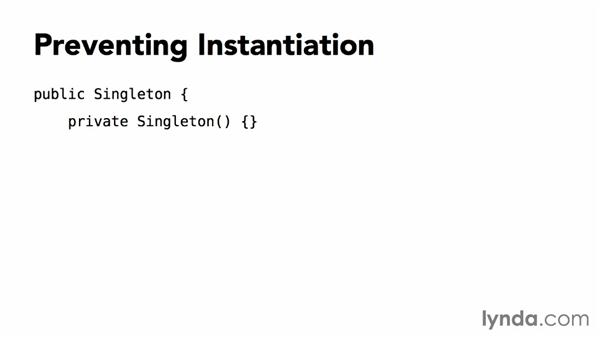 And while it might not be obvious at first, there is a method to our madness. And we're going to start by observing that one thing we can do. Is create a Java class with a private constructor. Now you might first ask, is that legal. And it is. And you might also ask. How am I going to instantiate it? And the answer is, only code in this class can actually call the private constructor to instantiate it. And while it won't be obvious yet, that's one of the keys to implementing this pattern. Sad again, only code that lives in the singleton class can call this private constructor.

Now let's make use of that fact, to write some code that calls the constructor. Like this. So here we have a static method, getInstance, that actually instantiates a class singleton, and further, once it's instantiated, it's returned to the caller. So notice, we've created a way to control the instantiation of this class, which right now has to come through the getInstance method. But so far, every time it's called, we're just returning a new object. Not a singleton object. But we can take this further. Here, we've added a private static variable unique, whose type is Singleton, and now we're assigning the new instance of Singleton to the variable the first time we've created it.

Now, the second time we call getInstance, if that instance already exists, then we just return one we've already made, ensuring that there's only one instance. Of Singleton. This is the Singleton pattern. We've created one class that ensures there's only ever one instance. And, we used the Guiness's method to get access to that incidence. The class diagram is simple. Just one class with a getInstance method. Now if you think you've got the Singleton pattern down, and you can stop the chapter here, keep going. because there's a lot of caveats to how this is implemented.

But for right now. This is the canonical way to implement Singleton Java. And we'll see all the caveats coming up. 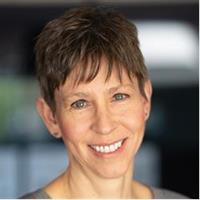 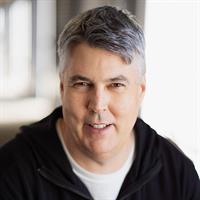 12/13/2013
Design patterns are reusable solutions that solve the challenges software developers face over and over again. Rather than reinventing the wheel, learn how to make use of these proven and tested patterns that will make your software more reliable and flexible to change. This course will introduce you to design patterns and take you through seven of the most used object-oriented patterns that will make your development faster and easier. Elisabeth Robson and Eric Freeman, coauthors of Head First Design Patterns, join forces to provide an overview of each pattern and examples of the pattern in action. Featured design patterns include the strategy, observer, decorator, singleton, collection, state, and factory method patterns.
Topics include:

Q: How do I import the exercise files in Eclipse?

A: Here are instructions for importing the files:
1) Save the download folder as any name you choose, such as DesignPatternsLynda. Place this folder in the default Eclipse project folder (the folder you choose when you start Eclipse).
2) Start Eclipse.
3) In Eclipse, choose File > New > New Java Project.
4) In the first New Project dialog box, use the folder name from step 1 as the project name. Check that the location path matches the default Eclipse project path and the name of the folder. (See NewProject.jpg.) 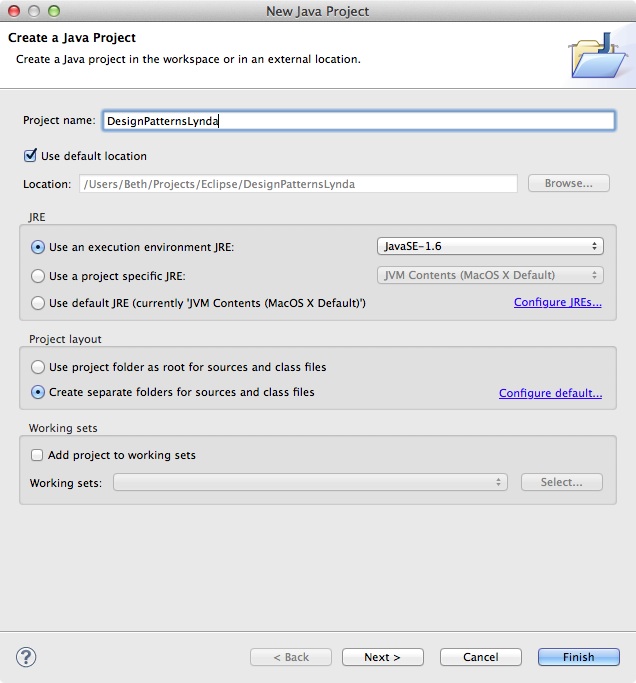 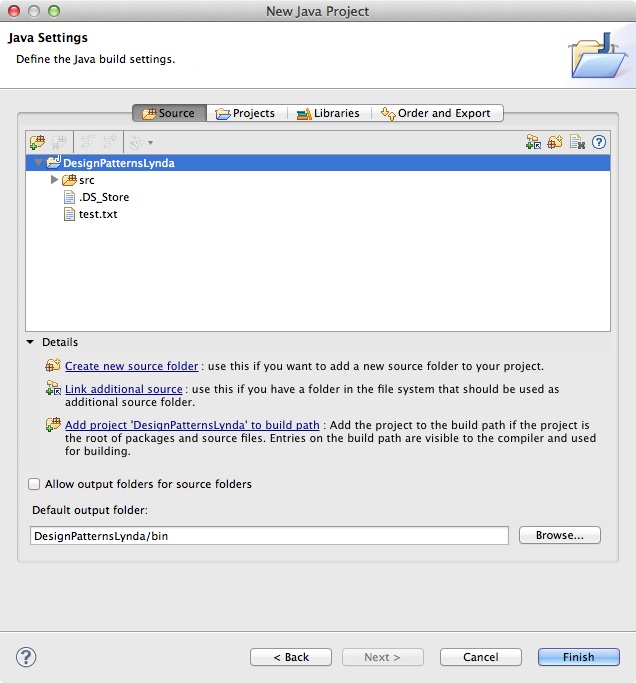 7) Click Finish.
8) You should now have a project in Eclipse with the following structure (see EclipseProjectStructure.jpg): 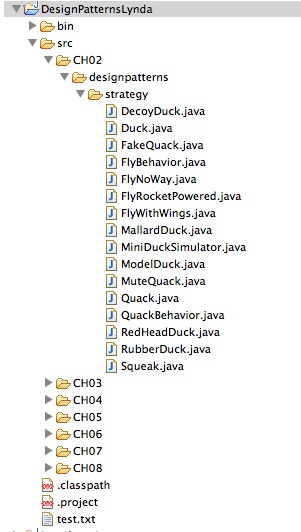 9) To compile the code, open the folder you want to work with and choose the main class.
10) Choose Run > Run As > Java Application.
Show MoreShow Less