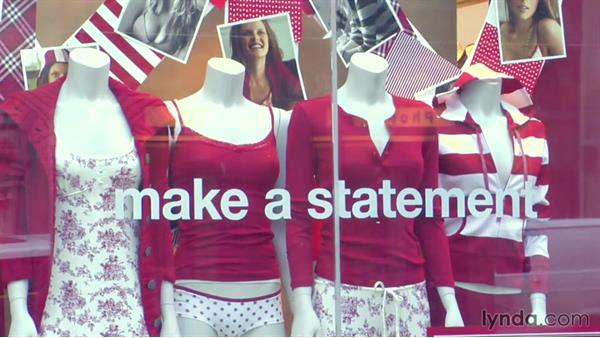 The way something is presented, will define the way you react to it.

So you can take the same message, and present it in three different typefaces. The response of that, immediate emotional response will be, different and the choice of typeface is the prime, weapon, if you want, in that communication. I'm going to say weapon largely because these days with commercial marketing and advertising. The way the message is dressed, is going to define our reaction to that message in the advertising.

So if it says buy these jeans, and it's a grunge front. You would expect it to be some kind ripped jeans or, or to be. Sold in some kind of underground clothing store. If you see that same message in Helvetica, you know, it's probably outside a Gap. It's going to be clean. That you're going to fit in. You're not going to stand out. >> All of us, I would suggest, are prompted in subliminal ways. Maybe the, the feeling you have when you see, a particular type of graphic, choices used on a piece of packaging is just, I like the look of that, that feels good, that's my kind of product.

But that's the type, casting it's secret spell. In a way, helvetica is, is a club. It's a mark of membership, it's a budge, that says we're part of modern society, we share the same, ideals, it's well rounded, it's not going to. Be damaging or dangerous. >> Helvetica has, almost a perfect balance of push and pull in it's letters, and that perfect balance, sort of is saying to us, not sort of, it is saying to us, don't worry.

Any of the problems you're having, or the problems in the world, or problems getting through the subway, or finding a bathroom, it's all, all those problems aren't going to spill over, they'll be contained. And in fact, maybe they don't even exist.