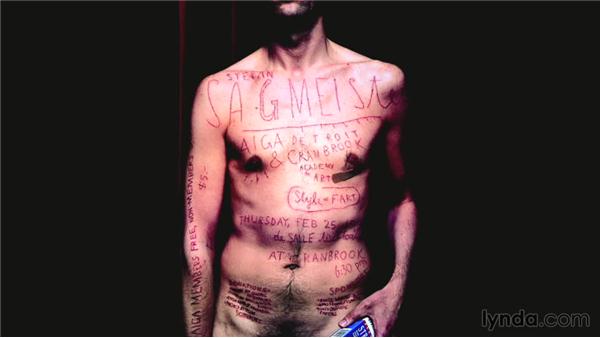 (upbeat music) - I myself got fairly disappointed with modernism in general. It simply became boring. If I see a brochure now with lots of light space that have, six lines of Helvetica up on the top and a little, sort of abstract logo on the bottom and a picture of a business man walking somewhere, the overall communication that that says to me is do not read me because I will bore out of you. Or not just visually but also in content because the content will likely say the same as it says to me visually. I was in terrible rock bands when I was 15, 16, 17 and I think through that experience got close to the album cover and essentially I went to art school because of album covers. I probably was the last generation that got taught doing everything by hand. So, we drew 10 point type with a brush. In general, I was always fairly bored in looking at type books and deciding over and over again, which type to pick for a certain project, it just didn't seem a very, interesting task to do. So here and there, I think with the records, with the CD covers, we started to do our own type and I think there was once instance it was for a Lou reed cover, where this hands drawn typography resonated. And numerous projects came out in that vein. In all sorts of directions. In more funny direction and in a more serious direction where at one time our intern carved a hand type into my skin for a lecture poster. The type, in an instant, in a single image, tells the story of its making, tells you about its process, in a very elegant way, in a very fast way. That typography strangely became so well known, just within the design community of course that some people thought that that's all we do. Which thankfully is not the case. (peaceful music) Well I always thought that that approach of people using only three or four typefaces very suspect. I think this could be interesting to do for a single project as a exercise to put up additional limitations in order to focus yourself but as a strategy over a lifetime, I think it's akin to a writer saying I'm only going to write in three or four words. Yes, you probably could do it but for one, why would you? And for the second, would it really yield an interesting body of work over a lifetime? (peaceful music) - Designers wanted to express their subjectivity, their own feelings about the world, their sense that they had something to say through design, through the design choices they make. And of course this caused controversy. If you take a figure like Massimo Vignelli who'd been one of the 60s high priests with his company Unimark, it's right there in the name, Unimark, the idea of a uniform kind of expression. When he looked at this new work, this expressive, subjective wayward, to his way of thinking irrational new way of designing, it seemed like the barbarians were not only at the gate but they'd stormed through and they'd taken over. - In the 70s, the young generation was after psychedelic type, you know, and all the junk that you can find and also in the 80s, with their mind completely confused by that, the disease that was called postmodernism. People were just going around like chicken without the heads by using all kinds of typefaces that could come around, that could says not modern in a sense. They didn't know what they were caring for, they only knew about what they were against. And what they were against was Helvetica.