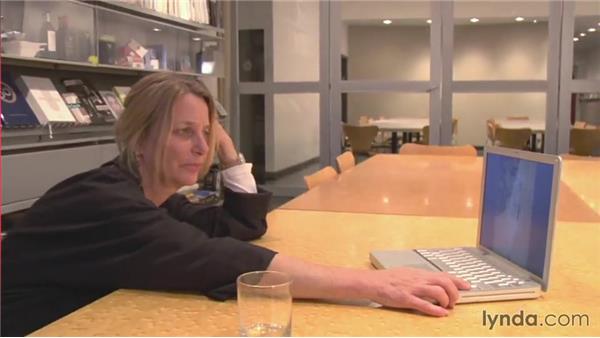 You come into design at the point that you start out in history without knowing you're starting out in history, and very often you don't have a sense of what came before you, and how it got there, and you certainly don't know what's going to come after. And when I walked into design as a, a, a student at Tyler School of Art, what, struck me, was sort of two separate cultures of design.

One was, one was, the, corporate culture and the corporate culture was the, the visual language of big corporations and at that time, They were persuasively Helvetica, and they looked alike, they looked a little fascistic to me, they were clean, it reminded me of cleaning up your room, I felt like it was some conspiracy of my mother's to make me keep the house clean, you know that, that all my messy room adolescent rebellion was coming back at me in this form Helvetica. And I, I, I had to overthrow it. Hey, I got some printouts of the stuff from last night.

I also was morally opposed to Helvetica because I viewed the big corporations that were you know, slathered in Helvetica as you know, sponsors of the Vietnam War. So therefore if you used Helvetica it meant that you were in favor of the Vietnam War. So how could you use it? Wow. What looked cool to me at that point were record album covers, zig zag rolling papers. You know, sort of the accoutrements of dope life and counter culture. Obviously underground newspaper and magazines and push pin studio. Pushpin Studios was the height of at the time I was in college, everybody's ambition to, to work there.

To do work that was as inspiring as their work because it seemed fresh and alive and witty and content-laden. Aside from the fact that Seymour Chwast and Milton Glaser could really draw. And I wanted to make work that looked like that. When I was at Tyler I wanted to be an illustrator, and I had a teacher named Stanis La Sigorsky, and I never knew quite what to do with the typography on my designs. We would make book covers or record covers for school projects and I would go to the, the local art store and go to Sandflax, and I'd buy Helvetica as press type and I'd rub it down on the corner of the album, the way I thought it was, was supposed to be kind of flush left.

And of course it would never line up properly and the thing would crackle and, and break and really be terrible. And Sigorsky told me let go of the press type and illustrate the type. And it hadn't dawned on me that typography could have personality the way drawing did. I realized the type had spirit and could convey mood. And that it could be your own medium, that it was it's own pallet, a broad pallet to express all kinds of things. So, I painted this cover for the AIGA Annual, and the title of the AIG Annual was Graphic Design U.S.A., and I decided that I would take the title literally and and, sort of analyze what graphic design USA was.

I mean yes it is. It's the same and repeated. That's why we're there. Helvetica caused it. >> And so in the post-modern period, designers were breaking things up. They wanted to get away from the orderly, clean, smooth surface of design. The, the horrible slickness of it all as they saw it and produce something that had vitality.