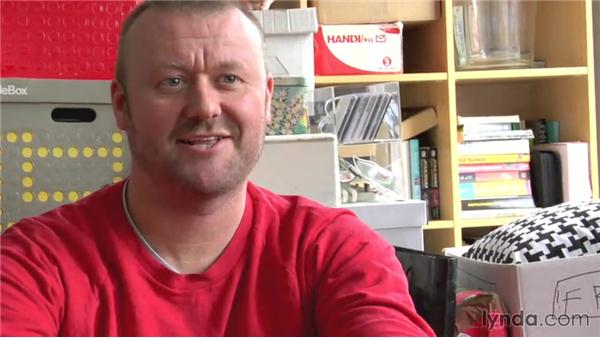 I'm not one of those people who is a real typographer. I don't know all the fancy words for letters and you know, all those sort of ligatures, and ascenders and descenders and all that kind of thing.

I'm just more sort of, you know. Just react to certain things and just do you know, what I feel is right with 'em. So I'm never really sort of you know, classical sort of you know, type guy. So, I get obsessed about things. You know, I collect things. You know, I've got so many bits of shrapnel and pay for, you know, things that, you know, you find on the street, or, you know, wrappers. And, it's just making something beautiful out of, out of something very ordinary. And that's what I kind of, really enjoy, is the ordinary things things that most people would just gloss over. You know, I find really beautiful. The biggest thing for me in terms of design, is to get a sort of an emotional response from a piece.

That's some of the best design I think. I see stuff, and to me, if it makes me go, I wish I had done that. That for me is the biggest thing you know. You just get this real, like, you know, like oof, you know, and in a kind of like oh that's nice. >> Yeah, sure. >> For me it's all about that emotional response. One of the things I've always really wanted to design is Airplane signage, you know, sort of an identity for an airline. I'd love to do like uniforms or, you know, you know, you know sort of seats, and you know, the whole thing, you know.

Trucks and that kind of thing, I just think would be really, you know, just sort of, you know, I've done these little 12 inch things, I want to go a little bit bigger scale, you know. It's that idea that something's designed to stand the test of time. And hopefully some of the things I've designed will be still being used in, you know, 20, 30 years. I'd love to, to, to think that. I got married about three years ago. I did the wedding invites. Which, believe me is just the worst job you could ever do as a graphic designer, but I've done other people's wedding invites, and I will never do one again.

It's the most stressful job I have ever had, dealing with mother-in-laws, you know is just horrific. But yeah I did, did ours, and on the order service and I did a little credit to give thanks to Maximizing helvetica but my wife vetoed that and I had to take it, take it off the invite. But yeah it was funny. I think I fell in this sort of step helvetica when I was at the org. I always really enjoy using Helvetica, because some people say you know, they use different type face; because it has this, gives a different feeling.

And I really enjoy the challenge in sort of making Helvetica speak in a different way. You know it's been around you know, 50 years coming up. That's just as fresh as it was, you know, and obviously it wasn't intended to be, you know, this cool thing but it's just a beautiful font.