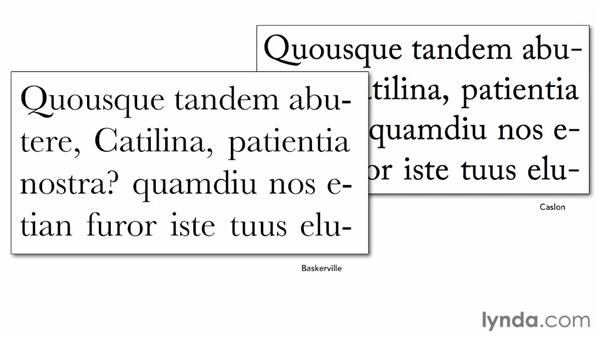 It happened during the Enlightenment; a time when European intellectuals promoted scientific thought over superstition, and questioned religious and political power. The transitional fonts start in 1692 with the Kings Roman, which was a typeface developed in France by order of King Louis XIV, designed by a committee from the Academy of Sciences who, by the way, favored analytical and mathematical principles. The letters were mapped out on a grid before being cut in metal.

Whereas old style fonts continued to reference the human hand behind the letters, transitional fonts had an increased emphasis on verticality. They also had an increased contrast between thick and thin strokes. Transitional letters represented the idea of what letters could look like, rather than the reality of what humanist pen-formed letters did look like. Here we have three Ms. On the left is a Minion M. Notice the slight angle of the left stem.

While Minion is a contemporary digital font, it is based on traditional old style fonts. On the right is an M from the original Caslon specimen sheet. The left stem is almost vertical. Remember that Caslon was designed late in the old sstyle period, in the 1720s, after the Kings Roman was designed. In the center is a contemporary digital version of Baskerville, a transitional font originally designed in the 1750s. You can see the left stem is straight up and down.

The differences between old style and transitional fonts are also noticeable in the shapes of the serifs. Notice how the Baskerville serif is thinner and crisper. It's a curve where the serif flows into the stem is tighter. The same is true of the foot serifs. Now, it's a little unfair, because I'm comparing a printed version of Caslon to a stylized contemporary digital version of Baskerville. So let's compare the digitized version of Caslon to the digitized version of Baskerville, and you can see the overall difference between the old style and transitional typefaces.

It's immediately obvious that the transitional font, Baskerville, is much lighter. The thins are getting thinner, so there's more contrast between thick and thin. The serifs are more delicate, and the head serifs are no longer wedge-shaped. The terminals are more stylized, and are shaped like teardrops. And most interesting to me is the stress is now almost vertical; the reference to the pen is gone. In the lowercase d, for example, the Baskerville bowl connects to the stem with thin strokes, while the weight of the bowl is all on the outside edge.

The Caslon bowl is connected to the stem with a thicker pen-formed stroke. I want to point out small areas of imperfection in the printed version of the Caslon M. It's hard to control ink being pressed onto a sheet of paper from a piece of lead type, and it gets even harder to control as strokes get thinner. John Baskerville is perhaps most famous for the technologies he developed in order to keep his letter forms crisp on the page. He developed new methods of making paper, new inks, and new drying methods.

He wanted to see how far he could push the properties of ink and paper to achieve his ideal design. I find connections between the transitional type designer, John Baskerville, and Web designers of today. Why? Because type design isn't just about the ideas for designing the letter; it's also about the materials and methods available to make the design actually work. I try to keep Baskerville in mind when I think of those of us today who are scrambling around, trying to get Web fonts to work on every browser.

It's frustrating, and it's imperfect, but it's worth it. I also try to keep him in mind when I think about picking appropriate fonts for the Web. Baskerville struggled to keep his font crisp and clear on paper. We don't have that kind of control over screen resolution, or how different browsers render Web fonts. What we do have is control over the fonts we choose to use. Due to their thinner thin strokes, and thinner crisper serifs, some transitional fonts may not be appropriate for use on the Web, but that doesn't mean transitional fonts won't ever work online.

In fact, Georgia is actually a contemporary transitional font designed for the Web. Matthew Carter designed it with a larger x-height, and slightly thicker thicks. Both helped maintain legibility on screen, while retaining the vertical rational structure of a transitional font.