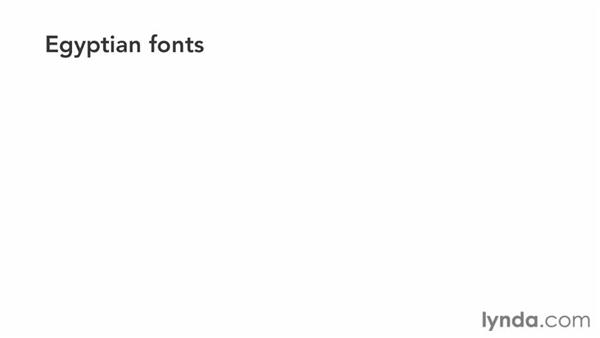 So far we've covered about 350 years of font design; 350 years of printing dedicated to books. There have been a lot of changes in fonts. Up until now, those changes have been in response to improved printing and paper-making technology, and of course, aesthetic approaches to letters. But then we enter the 1800s. The Industrial Revolution meant there were ready-made goods to sell, and cheaper, faster, printing and paper-making techniques.

A more literate workforce meant more newspapers and magazines, and ads used to sell the ready-made goods. And of course, broadsides like this one for a benefit concert at Niblo's Garden in New York City in 1835. And suddenly, with all the advertisements bombarding the average person, there was a need for legible, bold fonts to catch the reader's eye. Hence, the birth of slab serif fonts. Modern fonts were still in use. You can see some here.

All of these distinctive fonts -- modern, slab serif, and even the wood type we'll look at later in the course -- collide as more advertisements are printed and posted. This was the first time in the history of type design that fonts are designed in order to catch the reader's eye. Some think of slab serif fonts as a step backward, because up until this point, fonts became more refined and delicate, but I think slab serifs were necessary. Remember, old style and transitional fonts might have a regular and italic version, but they didn't have a bold version.

Slab serif fonts were used as the first bold fonts necessary for creating hierarchy. The first slab serif font was commercially released in 1815 by Vincent Figgins, a British type founder. Figgins was an experienced, talented printer who ran a shop dedicated to printing books. Broadsides, on the other hand, used slab serif fonts based on Figgins' work, but were usually printed as quickly and cheaply as possible. While Figgins released his slab serif font with the name Antique, slab serifs were commonly called Egyptian fonts.

This is because there was a craze for all things Egyptian after Napoleon's failed campaign to seize Egypt. He may not have undermined Britain's access to India, but Napoleon's expedition disseminated images and descriptions of Egypt leading to a fascination with Egyptian culture. Type founders, in an attempt to cash in on this fascination, called slab serif fonts, which have nothing to do with Egypt, Egyptian. Slab serif fonts are easily recognized by their serifs.

Slab serifs usually have the same stroke width as the strokes in the letters. We think of slab serifs as being square, like those shown here in Rockwell, but they didn't have to be. Officina's slab serifs are slightly rounder on the corners, while typewriter fonts like Courier have rounded slab serifs. The earliest slab serif fonts have round bowls, so you'll often see digital versions with a strict geometric structure. But slab serif fonts vary. Officina Serif has an oval bowl.

It also has an open aperture on the e, and a curve at the foot at the l. Both are humanist characteristics. Finally, the way the bowl meets the stem on the b creates a new shape; neither round, nor oval. Serifa's bowls, on the other hand, appear circular, but if you look closely, they're a bit square. Serifa also has variation in its stroke width. Notice how the strokes taper where the bowls meet the stem. Officina and Rockwell have more uniform strokes throughout their letters.

All three fonts have terminals that, well, don't have an extra shape to them, except for the extra stoke on the c, but you'll find many slab serif fonts with ball-shaped terminals. Originally, slab serif fonts where not intended for large amounts of text. They were heavy, and meant to catch the reader's eye, but contemporary slab serif fonts offer a variety of weights and letter structures to choose from, making it possible to find a legible, comfortable slab serif to use for extended reading.