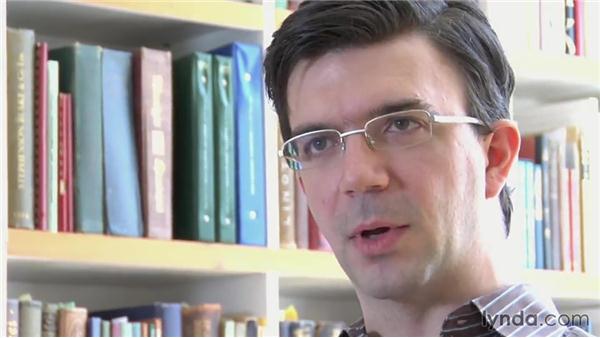 Designers and I think even readers invest so much of the surroundings in the type face, American Apparel use it looks cheeky.

And American Airlines use it, it looks sober. And it's not just matter of the way they choose in letter spacing and colors. There is something about the typeface that I think really invites this open interpretation. You can say that typefaces are either those that are fully open to interpretation or merely have one association attached to them. You know a typeface made of bicycles or candy canes or something. Just says one thing. And helvetica says everything, that's perhaps part of it's appeal. I mean typography has this real poverty of terms to describe things beyond, you know, x height, and cap height, and weight, and so on. I find that when Tobias and I are working on products together, we tend to use a lot of qualitative terms that are entirely subjective.

Working on the typeface Resquire, years ago, remember us saying, I, I remember my saying, no this has that like Saturn five rocket, early NASA quality. It needs to have that orange plastic, Olivetti typewriter, Roman Holiday espresso feeling. And I know you got exactly what I was saying. >> I did. >> But there's, there's really no way to describe the qualitative parts of a typeface without resorting to things that are fully outside it. And we're constantly saying you know, this has that like, it feels kind of Eric Satie, it needs to be This has a kind of belt suspenders look, it needs to be you know much more elegant, like a hand laced shoe.

>> I have been collecting these signs for a couple of years now and one of my favorites is these signs have a number of these. This is what the street signs in New York City used to look like. This actually functions so much more clearly, and so much more effectively than what we see out on the street now. Those are classical modernist we've lying on how aware a readership be of, of a typeface is that they should be aware of it at all. You know, it should be this crystal goblet you know, there to just hold and, and display and organize the information.

But, I don't, I don't think it's really quite as simple as that. I mean I, I think, even if they're not consciously aware of, of the typeface they're reading, they certainly be affected by it, the same way that an actor that's miscast in a role will affect someone's experience of, of a movie or play that they're watching. They'll still follow the plot, but, you know, the less convinced or affected. I, I think the typography is similar to that, you know or the you know a, a, designer choosing typefaces is essentially a casting director.

>> There is very little tike in my world outside of work. Like everybody else I'm aware of the fonts being used in in my environment and you know, the standing joke, the graphic designers can't see historical movies because the fonts are always wrong is certainly true. >> It definitely makes the, the world outside the office very different. This my fiance and I were trying to remember the location of a restaurant in our neighborhood. And she remembered it as that new place that's just a couple blocks down from the dry cleaner. I remembered it as that new place, just a couple blocks down from the place with bad letter spacing out front.

>> Nobody doesn't know what Helvetica is. I mean, many of our careers, certainly before anybody had, would have had a PC or a Mac. Knowing what fonts were. I think I've even met people might have known what Helvetica was. The fact that it's been so heavily, licensed and made available through these very populous technologies, has kind of furthered the mythology that it's the ultimate typeface in some way. And even, I think for us professionals, that's hard to escape from. I sort of find myself buying the idea that, oh, this sans serif evolved for a hundred years and the ultimate expression was Helvetica. And realizing sort of, wait a minute, that's not quite true historically or aesthetically or culturally or politically.

But it's, it, it there's something about it that does have a feeling of finality to it. This is the conclusion of one line of reasoning was this typeface. And perhaps everything after it is secondary in some way.