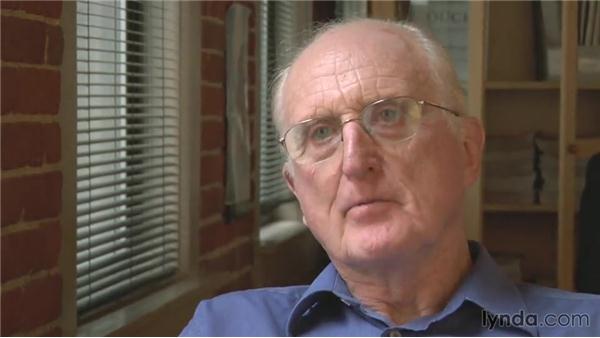 This is the original type specimen of Helvetica before it was Helvetica and had its original name Die Neue Haas Grotesk. The whole story of how Helvetica came into being is, is not entirely clear is to me. It is said, and I think it's true that Eduard Hoffman, who had been the boss at the Haas type foundry wished to. Make a modernized version of Akzidenz Grotesk, which was essentially a traditional 19th century journal in sans-serif.

And his method of doing that was to sort of clean it up and so on. And it was of course Max Miedinger that made the drawings for Helvetica. I received the impression from people I knew back in the 60s and 70s. The Kaufman's part in this was a very much more significant one than you might just assume by reading in a, in a textbook that Max Miedinger was the designer of Helvetica. >> You can easily say this was a joint product of both and my father.

And couldn't reduce a typeface alone, and neither could my father. But when both were working hard together. Then something good resulted. Here are the first trials of which was the first name of Helvetica. >> I knew the way things worked at us, and I had gradually picked up on the importance of Edward Hoffman and his almost, pathological shyness.

And the way that he would use other people's hand. But boy could you see his mind at work on the faces where he was deeply involved. >> You have here a note by Edward Hoffman indicating all the desired corrections, the capital of Y is too slim. Capital A is also to slim. >> When you talk about the design of the test or Helvetica.

What it's all about is the interrelationship of the negative shape. The figure grand relationship. The shapes between characters and within characters with the black if you like with the inked surface. And the Swiss paid more attention to the background. So that the counters and the space between characters, just hold the letters. I mean you can't imagine anything moving.

It is so. Firm. It's not a letter that's bent to shape. It's a letter that lives in a powerful matrix of surrounding space. It's, oh, it's brilliant when it's done well. >> My father hath clear ideas. How the typeface should look like? So my father and Miedinger sat together, and he started drawing. Here you have a proof of an alphabet, with observations by Max Miedinger.

>> When Miedinger worked for Haas he did not work as a designer, he was actually a salesmen, his job was to travel around Switzerland taking orders for fonts of type. >> By profession he was a graphic artist, but he realize that he could make more money and selling foundry type. But my father said if ever I have an idea of a new type face, I'm sure that you could design it. I have here as specimen t, type specimen book of both type and foundry; Stempel and Haas.