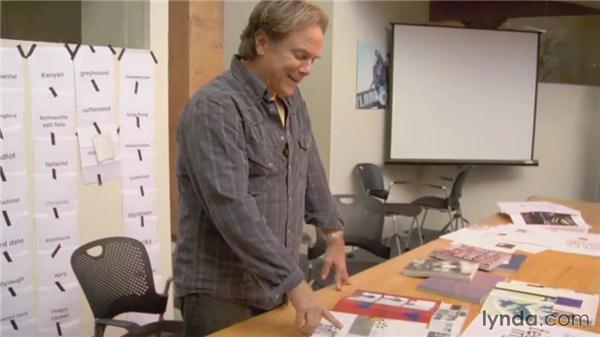 I have no formal training, in the field, in my case I've never learned all the things I wasn't supposed to do, I just did what made sense to me. I was just experimenting, really. So when people started getting really upset. I didn't really understand why. I didn't see, well, what's the big deal? What's, what are you talking about? And it was many years later, that somebody explained to me, probably better than I can explain it now.

Is that, basically, there was this group, that spent a lot of time. Trying to organize things and get some kind of system going, and they saw me as coming in and throwing that out the window. Which I, I might have done but it wasn't starting point, and then it wasn't the plan, and you know, only much later did I learn the, you know, what, terms modernism and, and, this and that. Raygun magazine, was very much experimental, it was completely experimental, into every issue a child, lot of things and a lot of them worked and a lot of them didn't work.

I never saw a proof, so lot of times they were just mistakes, flat out mistakes that people would write long essays on why I did this just you know, black type on a black boot or something, and there no, I never saw a proof everybody is talking about,. It's very hard to do, the more suggestive, more interpretive stuff well. You know I can teach, anybody off the street how to design a reasonable business card, newsletter, but if I, bring the same group off the street in and play a CD and play now let's interpret that music for a cover.

Well, nine out of ten people are going to be lost and are going to do something really corny and expected and one person is going to do something amazing, because that music spoke to them and it sent them in some direction that nobody else could go. And that's, that's the area to me that it gets more interesting and exciting and. And, and, more emotional, and that's where the best work comes from. This is an article, on the singer Bryan Ferry, and when I read the article, it was very much like, so many of these others I had read.

It's like aw man, how disappointing, how boring, and I went through all my fonts. Which at the time would have been hundreds and hundreds. Well still is for that matter, but. And didn't find one that seemed to fit what I, my kind of disgust and boredom with this article. And I finally came to the bottom and there was dingbat. Of course it's zapf dingbat and so literally the last one and I was like. Well, it's boring, it's not worth reading. Why not do it in Zapf Dingbat, that's a font. So it was, it's all set, in Dingbat, it is the actual font, you can highlight it and make it Helvetica or something, and you'd be able to read it but it really wouldn't be worthwhile, it's not well very well written.

Don't confuse, legibility with communication. And just because something's legible, doesn't mean it communicates, and more importantly doesn't mean it communicates the right thing. And vice versa. Something by being, maybe difficult to initially read may be sending a completely different message. Message, that is valid for where it's being used. And then may require a little more time, or the involvement of the reader. But it almost seems stronger the other way. If something is a very important message, and it's said in a, in a, in a boring, nondescript way, then the message can be lost.

I mean, that doesn't say caffeinated. It's just like, hello? >> Why not? >> It's just sitting there, nothing caffeinated about it, there's nothing extramarital about that. There's there's no sunshine here. That's no fun! That's not a fun sandlot! Where's the explosion? This could be the first date! This might be close, those busses are kind of boring. There's a very thin line between simple and clean and powerful, and simple and clean and boring.

>> That was sort of the rise of what's refered to as grunge typography, that became a all consuming aesthetic for about a, you know, two, three, four, five years as that trend worked its way down from the masters who originated it to any one who sort of already had a tendency to make mistakes and all of a sudden found they looked good now, instead of incompetent which is the way they looked the day before. >> Typography was so broken, by the end of the grunge period, you know just lying there in a twisted heap, all rules cast aside, no apparent way forward, that all those designers perhaps do by the late 90's was to go back, to return to an earlier way of design.

But with a new set of theories to support it.