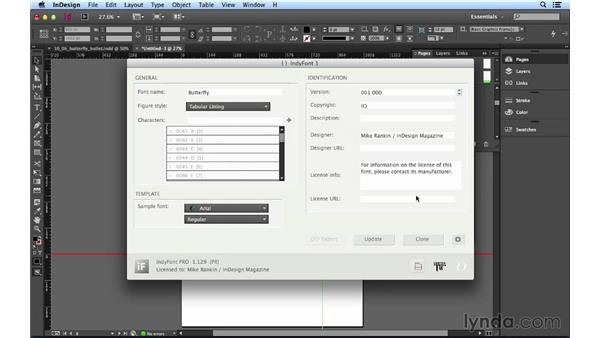 IndyFont is a scripted tool that you can use to create new custom open type fonts directly within InDesign. Why would you want to do this? Well for one thing, with IndyFont, you can create your own custom bullets from any shape you want. You don't have to search around, looking for the bullet shape you want in an existing font. You can just make it right away. You can also include your logo or other symbols and icons that you commonly need in a custom font. So, putting them in your documents becomes as easy as typing a single character.

And you can save time and effort with IndyFont since you don't have to buy and learn how to use a separate font editing application. Plus the fact that you can create fonts without ever leaving your layout document is just really cool. So let's check out IndyFont. You can find IndyFont at indiscripts.com. Here, you can read the description, download a trial version, or purchase it. IndyFont works with InDesign CS4 and later on both Mac and WIndows. And I'll switch over to InDesign. And with IndyFont installed, you'll see the scripts here in your Scripts panel. I'll double click to run it. And in the dialog box, I can start by giving my new font a name. I'll just call it butterfly. And in the character field is where I tell Indyfont which characters I want in my font. If I hover my cursor over there, a tool tip tells me how to enter things in this field. So, I can indicate a range of characters with two periods, like A, period, period, Z or I can name specific characters preceded by forward slash. I'll enter A, period, period, Z here and press Return. Now I have the characters that I want. And for the template, I can choose a sample font. I'll leave it at Arial, but I can use any of my installed fonts as a tracing template. On the right side, I can customize the font info, I can set a version number, copyright, description, and so on. I'll leave these as they are and click Create. A template document is created. The first page has my font info. And after that, there's a separate page for each character. So page two is capital A. Page three is capital B, C, and so on. On each page, the red guide is the baseline. And to the sides of each character, are the side bearings which create the horizontal spacing. Now to save time, I'm not going to create a whole alphabet, I'm just going to create a single character font with a custom bullet. So I'll run IndyFont again by double-clicking on the script. And I'll edit my font. I'll click in the character field and shift click at the end to select all the characters and press delete. Now just enter a bullet in here, by pressing option or Alt+8 and pressing return.

So now my font is just going to be made up of a single character, a bullet. I'll click update. And now my document has just two pages. Again, the description page, and after that, the page for the bullet character. I'll switch over to my other open Indesign document, which you'll find in the exercise files folder for this lesson. Butterfly bullet. I'll select the object here, which looks like a butterfly, and this was just drawn here in Indesign. I'll copy it, switch to my template document and paste it in. Drag it into place, and to make this bullet recognizable as a butterfly I'm going to scale it up a bit. So I'll go to the Control panel, and I'll scale it up to about 250%, move it into place, and I'll move this green guide over to the right. To accomodate the new width. I'm run the script again by double clicking on it. And I'll click on OTF export. I can pick a location for my font. The default is the InDesign fonts folder which is very smart because this will enable InDesign to usually see the font right away. So I can start using it. So I'll click open. My font has been created. So I'll click okay. I'll create a new document. Switch to my type tool. Create a text frame. And I'll press option 8 and I type a word. Zoom in so we can see that. Select the bullet character and I'll apply my new font. Butterfly. And there's my custom bullet font. Note that I could also use this font in a character style with the bulleted list.

And remember, this is a real standard, open type font that I could also use in any other application. Not just InDesign. And this simple example barely scratches the surface of what IndyFont can do. It's really an amazing tool. Just remember that IndyFont can't edit your existing fonts. You only use it to create and modify new fonts. So if you enjoy using InDesign, and you ever wished you could create custom fonts with your own unique bullets, logos, or other characters, I encourage you to check out IndyFont.

12/11/2013
When you're working with type, you need a plan for sourcing, organizing, validating, and managing fonts. In this course, Mike Rankin explains the different types of fonts and font licenses available on Mac and Windows and where you can acquire new fonts. He'll show designers how to use built-in OS tools as well as third-party software to manage font libraries. He'll provide tips on organizing fonts, and troubleshooting common font problems.
Topics include:

A: We updated 11 movies to reflect changes in to the treatment of fonts in the Mac and Windows operating systems.