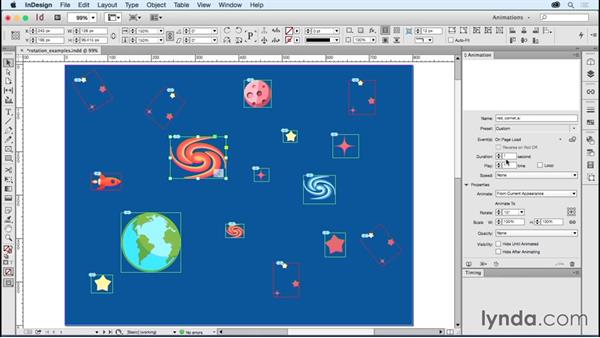 - One of the ways that you can animate objects is to rotate them. In the animation panel's property areas, you can see that we have a rotate field here and we can enter any value into that. We also have some rotation presets. We can rotate something 180 or 90 degrees clockwise or counterclockwise. I'm gonna set our little comet here to rotate 180 degrees clockwise. That gives me a positive value of 180 in the rotate field. It also sets a little ease in and ease out here.

On this star, I'll rotate the opposite direction. 180 degrees counterclockwise. In that case, you see we have a negative value. Let's take a look at these. I'm gonna preview them in the EPUB Interactivity Preview Panel by using the keyboard shortcut shift + option or alt + return. There's our first comet and then our second one. One goes in one direction and one in the other. But the great thing about rotation is that you can put in any value that you want.

I'm gonna remove the animation from this larger star here and I'm going to go directly into the rotate area of the properties section of the panel, and set the rotation. Now I do have some additional menu choices here. I could, again, make this rotate 180 degrees, 150, 120, and so forth. Or a negative value, counterclockwise, and the top part of this menu. But I'm gonna just input a value directly. Let's make this rotate 360 degrees, all the way around.

Let's preview. There it goes. It spun around completely one time in the duration of one second. You can set a very small amount of rotation. I'll set this to 15 degrees, and I'm actually gonna take the animation off of this other comet, and let's focus on our large star here. It's just gonna move a tiny, tiny amount.

You can actually input any value in here up to 7,200 degrees in a clockwise or counterclockwise direction. So for example, if in one second I want this object to rotate, let's say, four times, I can put in a value that would be four 360 degree rotations. Watch. There we go. A spinning top. It rotated four times in one second.

So in addition to putting in any value here, I'll set this back to 360 degrees, the other thing we can do with rotation is change the orientation point of the rotation. The default is that an object rotates from the center. Which is what you've seen here. But I could change this to another corner. And when I do this, you'll see quite a different effect. Here, our star is spinning wildly into space, because it's rotating from this upper left corner.

You can use rotation to do a lot of interesting things. Let's look at another example. I'm gonna go to the next page of this file, and let's take a look at a couple of gears here. I'm going to set this larger gear to rotate 360 degrees clockwise, for a duration of, let's say, two seconds. I'll input two here and press enter. The smaller gear I want to have rotate counterclockwise, minus 360 degrees. Also for two seconds in duration.

We're gonna talk a lot about the timing panel in another video, but for now I wanted you to see the effect of simultaneous rotation. Now when we preview our gears, they'll play together, and they're working perfectly. You can also use rotation with other animation effects at the same time, such as moving or scaling, and it's one of those features you have complete control over. You don't have to choose the amount of rotation you want from a preset menu, but you can input any value.