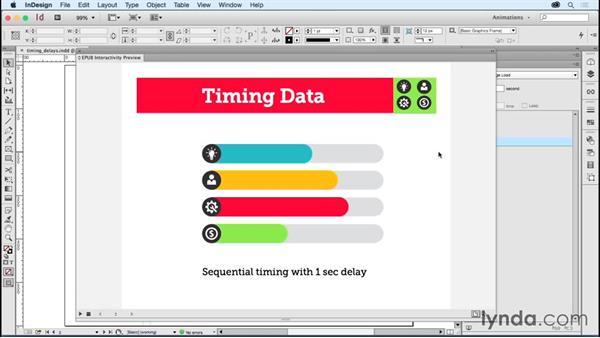 - When animations play one after the other as set up in the timing panel, by default they play immediately, one right after the other with no pause in between. Sometimes that's not exactly how you'd like your animations to play, and the timing panel lets you set up delays, both to individual animations that play in sequence, or also to items within linked groups that are set to play together. This gives you a lot more control in how your animations play out. Let's take a look. In this example, each bar on this bar graph is set to scale from a width of zero up to 100%.

The scaling options are set here, and they're set to animate to current appearance, with the proxy set on the left. So they're going to start at zero width here and grow to the right. The bars are gonna kind of draw themselves. This example is set up with default timing. One bar is set to play right after the next. Let's take a look. Bar one draws, finishes, then bar two, bar three, and bar four. This is standard sequential timing, and this is what you'll get by default.

Items are set in the timing panel in the order you animate them. But let's look at what happens when we put in a delay. I'm gonna turn to the next page of this file, and in this case if we look at the timing panel, these are still listed sequentially, but starting with the second bar, we have a delay of one second before the next bar will play. This would be useful for example if i wanted to say something after each bar grew. Let's see how this previews. Bar one draws, I can make a point, then bar two draws, I can say something else, bar three, and bar four.

And if I needed to say more, of course, I could increase the amount of the delay. but it will cause the next item in the timing panel sequence to wait by however long you set this delay before it plays. Let's look at an example with linked items. I'm gonna turn to the next page of this file, and these are our same four bars, but in this case I've selected them all and linked them together by clicking on the link icon at the bottom of our page. Let's preview this page.

They all play at exactly the same time, and they finish at about the same time, too. But what if I want one of these bars to play but before it finishes, start the next one to play? And then the next one to play, and the next one. I want them to start at different times. Well, that involves linking them. Let's look at an example. I'm gonna turn to the next page of our file, and in this case, the animated objects are still linked, but what I've done is starting with the second bar, I've put in a quarter of a second delay.

They're all gonna start at the same time, as far as timing goes, but bar number two is gonna wait just a split second before it starts playing, as will bar three, and bar four. Let's take a look. Bar one starts, there goes two, three, four. So, this is a way of staggering them. You can't do it when they're listed sequentially in the timing panel, because sequentially means sequential. The second item's not going to play until the first item completes.