Using Hide Until Animated/Hide After Animating 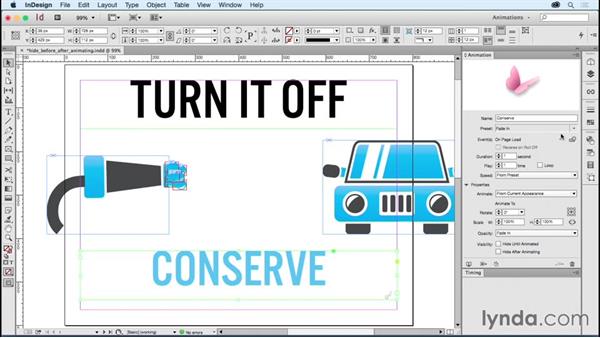 - Sometimes when you apply an animation to an object you don't want it to show up before it starts animating, and sometimes you want something to animate, then go away. Let's look at a simple example and show you what I mean. I'm going to preview this in our EPUB Interactivity Preview Panel by holding down the shift + option or alt + return. We have a little car wash going on, and then "conserve". Don't wash your car, which is something we can't really do here in California. Let's take a look at how this is set up.

I'm going to select my water drops here which are all grouped together in front of the hose. If we look at the animation panel, you'll note that at the very bottom of the panel we have the visibility setting. Hide until animated, and hide under animating. In this case I've applied both to these water drops, which are set to the preset move right, and they've been customized, that's why the word "custom" is here, they've been customized in terms of the length of their motion path. So that they hit the car at just the right spot.

Watch what happens if I turn off the visibility. Let's preview again, and now the water drops are just sitting there and then they go over to the car and just sit there. That's not at all what we want. We need the water drops to not appear, then start moving, and then go away when they hit the car. Because they're positioned in front of the hose, not behind it, we can't really hide them with the hose. And once they hit the car, likewise, there's nothing to conceal them. So, that's where hide until animated, and hide until after animating comes in.

One thing to keep in mind is that you don't need to use hide until animated if you're using the fade in or appear presets. This word "conserve" for example is set to fade in. By definition, this preset has its start at zero. No need to hide it until it's there. Likewise, if you use fade out or disappear, you don't have to use hide after animating either, because those are built in, if you will, to the nature of the animation itself. But any other animation, movement, rotation, scaling, et cetera, if you need something to not be visible before it animates, turn on hide until animated, or hide until after animating if you need it to go away, just like we've done with our water drops here.

There's one other example I want to show you, where hide until animated in particular is used quite a bit. I'm gonna go to the second page of this file, and let's preview this animation. This is from a children's book, "Can you name the animal?" I'll click, monkey. My favorite giraffe. I like crocodiles, too. Who is this? And so on. Notice that when I click these buttons, the text is not fading in.

Instead, it's pulsing. Frankly, if I had the text fade in, I don't need to use any hide until animated setting. But in this case because these have an animation preset pulse applied to them, down here, I have to hide them until animated. I'll just turn that off for this one button, and you'll see immediately the problem. Let's preview this, and the text is already sitting there. There's no surprise involved. So, in this case, hide until animated solves the problem, and then it gets triggered by the button when I click on it.

It's very common with button actions to use hide until animated. You can see then that there are certain situations where you want an animated object to be hidden before it starts doing its thing, and sometimes you want it to go away when it's done. That's where hide before, and hide after animating comes in.