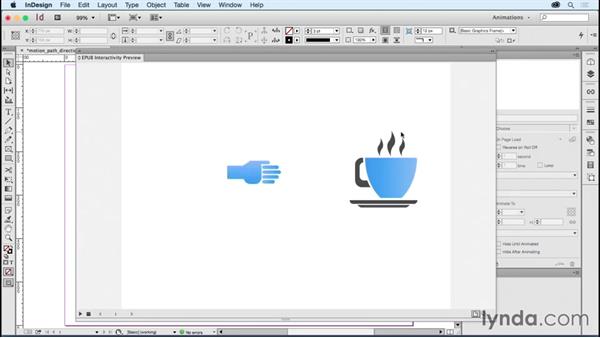 In order to work with motion paths effectively, especially custom motion paths that you create yourself, it's important to understand how motion path direction comes into play. Here I have an example where I want this hand to move from the left side of the page to the coffee cup here on the right. Because the positioning needs to be precise, I want to leave the hand just where it is and animate to that location and to this appearance. So, I want this to move right. I'll start by applying the Move Right preset.

Move Right starts the animation in the middle of the hand, but goes the wrong way. I want it to go to the current appearance. But all that does is reverse the path direction. It's still on the right of the object. Let me try To Current Location. There. That's more what I had in mind. To Current Location starts on the left and moves right, just as the preset says, to this location. But it doesn't necessarily manage the appearance.

What if, for example, I want this hand to start out at 50 percent less scaling than what it has, and scale up to this position? Well, let's try it. So I'm gonna come over to the Scale field and set this to 50 percent. I want it to start at 50 percent and animate up to this location. Watch what happens. Let's preview this. Wait, that's not what I had in mind.

I'm gonna have my hand selected here, and instead of Move Right, I'm going to choose Move Left, just the opposite of what you'd think. Right now, the motion path starts here and goes to the left. But I'm going to change it To Current Appearance. There. That looks very promising. Move Left, the line starts on the left, it actually moves to the right because it's going to the current appearance. Now I can put in a scaling factor of 50 percent, so it'll start at 50 percent and scale up to the current appearance.

Let's see what we have here. Perfect. That's exactly what I want. What if now instead, I want to have the hand follow a curve and end up here, and I also want it to scale up at the same time? For that, I have to draw a custom motion path. I'm gonna remove the animation from the object by clicking the little trash can over here, and I'll use my pencil tool to draw a little curve. Very simple, something like this.

It's fine if I have that stroke there, it actually makes it easier to see. I've drawn the line from the left to the right, which is just natural for me, I'm right handed and I tend to draw from left to right. So this path starts here on the left and ends up at the right. Let's apply that path to our hand. I'll click on the Convert to Motion Path icon. And there's my motion path. But wait. It's on the wrong side of the hand. This looks like the same problem I'm gonna have with Move Right.

If I go To Current Appearance, which is what I need, it doesn't work. It's as though if I draw a path from left to right, it's always moving to the right. Like that first preset. And it's on the wrong side of this hand, or the side that I don't want. So I'm gonna undo this. There's my path. And now I have two choices. I can either redraw the path from the left to the right so that it starts here, and then I can set To Current Appearance correctly.

Or instead, if I don't wanna redraw the line, It's a path, right? Well, I can use some of my path commands to fix that. I'm gonna go to the Object menu and choose Paths, Reverse Path. Now, even though I drew this path from the left to the right, its direction as far as InDesign's concerned is from the right going to the left. Now I can shift-click on my hand and make it a motion path. Right now it starts here and goes to the left, but that's OK because I'm gonna change it To Current Appearance.

And now it works exactly the way I want. I'll set my scaling to 50 percent. It's going to start at 50 percent and then animate to the current appearance, which means not just location, but the appearance as well. Let's preview it. Up it goes, and down. Exactly into position. So again, one way to look at this is if you draw a path from left to right, the path will be on the right side of the object, and it'll be moving from left to right, at least initially. If you need it to be on the left side, you can still draw it left to right, but use the Reverse Path command.

This gives you another tool to control the start and finish of your motion path. Understanding motion path direction will save you a lot of time and frustration when setting up your animations with motion paths. Save time, and go have a cup of coffee.