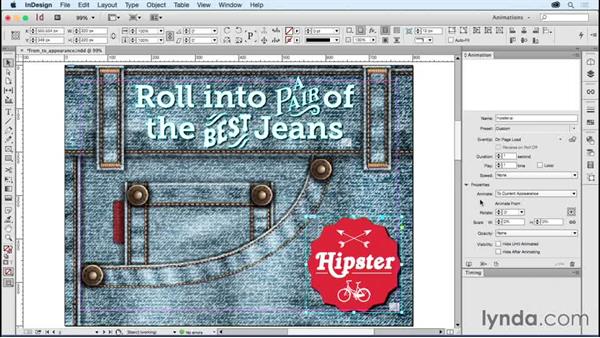 So while most of the animation presets will start things From the Current Appearance, sometimes there are animations that you're setting up that are easier to create and predict the result, if you change the animation to be either To Current Appearance, or To Current Location. Let's take a look at another example. I'm going to turn to page two of this file, and let's preview this animation. I'm using the keyboard shortcut, shift, opt or alt, and the return key. In this case, the headline scales into position as does the logo.

The headline starts with the scaling percentage 0% in both the width and the height, and goes to its current size and location. So we have to set this To Current Appearance. We couldn't start From Current Appearance, 'cause you can't even have an object that's 0 by 0% in size. I've found that when I'm scaling objects, I actually use To Current Appearance quite a bit. Same thing with this logo. It's set to Scale from a width of 0 and a height of 0, to it's current size.

So we set this To Current Appearance. I'll take the animation off of here and show you exactly how I set that. I'm going to click on the garbage can here, and first, when we're making these kind of custom settings, I need to change the scaling factor. So, I'm going to come in here and set this to 0, and because this little link is set, the height goes to 0 as well. Now I can get to the Animate panel and change this To Current Appearance. It's going to start at 0%, and scale to this size.

And, this is sort of logically the way I look at this, this is the size I want to end up with. Now, the other thing that I want to have happen here, is, as this scales in, I want it to fade in. But here's the thing, when you switch the Animate order To Current Appearance, the Opacity is the opposite of what you'd think. It's kind of an Alice in Wonderland effect. I don't want to set this to fade in, I want to set it to fade out To the Current Appearance. Let's preview it again and you'll see what I mean.

The headline scales in, and the logo fades in. If I had set it to fade in though, it would do just the opposite and fade out. That's an example of To Current Appearance. Let's take a look at To Current Location. I'm going to go to page three of this file. Let's preview this animation and see what's going on. Here we have type that moves into a very precise location on this photograph. I'll show you how it's set up.

I'm going to turn to the next page in this file, where I don't have any animation applied. Now, you might think that to have this type move in, I could use one of the presets, like Fly in from Left. If I try that, here's what it does. Let's preview it. And what happens as the type flies in, is it also has a change of opacity, and I don't want that, I want it just to move in to position. If I try to start the type out here From Current Appearance, and then move it over here, I could use the animation proxy, but it's really not very precise, so I could move the type out here, and turn my proxy on, but it's just a square block.

I want to see exactly where this type is going to end up. I'll undo that setting, and let's remove the animation from it. So, I'm going to start with a type, and I am going to set it to Move Right, I want it basically to go from the left to the right. But now I'm going to set Animate From Current Appearance To the Current Location. Notice the motion path is on the right hand side of the type, but when I change To Current Location, it moves to the left.

It starts on the left and then ends where you see this arrow. This is the only way that I could make this work. So I'll set this one to Move Right, To Current Location, and our last word. Move Right, and To Current Location. This way I can position the type exactly where I need it, and animate to this point. Again, a quick preview, and we get exactly the effect we're looking for.