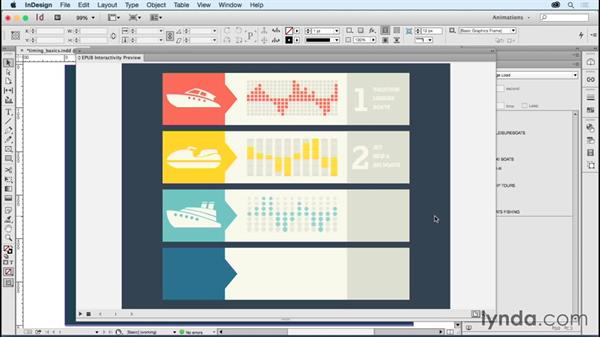 - They say timing is everything, and it's really true when it comes to InDesign animations. And while changing the duration of the animation will affect its timing in one sense, here in the Animation panel, if you increase the duration of something it'll make it take longer, or if you decrease it, it'll happen more quickly. The real control for overall timing in your animations, especially when you're animating multiple objects, is in the Timing panel. That's why it's really important you understand exactly how it works. And it's pretty simple, really.

It's really important to name the objects in your file, especially when you're animating multiple objects, and we're gonna talk about that in detail in another video. But back to our Timing panel. Right now, this is the order that the Timing panel is set in, and it's the order in which I animated each object in this file. Let's preview it. First, the ship comes in, and then the icon under that, and the icon under that, and then the data starts. It goes top to bottom.

Why is it in that order? Because that's the order that I animated these objects on the page. But, it's not really the order I want them to play in. I'd like everything in each numbered group to play in sequence. To do that, we use the Timing panel. I'm gonna close my Layers panel, and let's take a look at what we have here. I have the ship icon to start with. I want that to be followed by the 1-data here. So, I'm going to point to it in the Timing panel and just move it up.

Next, I want the text for number one item, and I'll grab that and move it up. And now I need to just go through the Timing panel and arrange everything in order. I'll group all the twos together, starting with the icon, the data, and then the image, and then the threes, and number four is in order. Now, let's preview the animation. By moving these objects in the Timing panel, they now play in the sequence that I want.

And it makes a lot more sense. You don't always animate objects in the order you want them to play in, and that's what you use the Timing panel for. But let's say I want to do this a little bit differently still. What I think I'd like is for the icon to come in, then I'd like the data and the text to come in at the same time, and I'd like that for each group. I'll close this panel, and let's take a look at how we set that up in the Timing panel. So, I want my data and my text to come in at the same time.

I'll click on data and then shift-click on the text. To make them play at the same time, I use this icon at the bottom of the panel that says "Play together." It's a link. So now these two objects will come in at the same time. I'll do that same for group two, group three, and group four. So now I'll have the icon come in, followed by the data and the text. Notice, if I wanna select these linked items, I actually click on the bracket here, and that lets me select them really quickly.

At any rate, let's preview this and see what we have this time. My icon comes in, and these two play together. Same thing on the next row, the icon, the data and the text. Perfect. But now that I look at it, I think I'd like the icon to come in at the same time, I'd like everything on each row to come in at the same time. These three objects, these three objects, and so forth. So, to set that up, here's what we'll do. In the Timing panel, if we wanna add the icon to the data and the text, all we need to do is grab the name of the icon and just slide it in to our group like that.

You see? Now they're all bracketed. It's kind of like the Layers panel in a sense, I suppose, that you can just move things into a group. Although these aren't groups exactly. They're just linked when it comes to timing so that they'll all play at the same time. Let's preview one more time. That's perfect. Each row of information comes in together. If I wanted to reorder this for some reason, let's say I wanted to trick people and play items one followed by item three, if I want to move these items in the Timing panel, I grab them by the bracket and just move them up.

I don't need to try to select them individually. And then in fact they would play in this kind of unexpected order. So, the Timing panel isn't a timeline exactly, like you'd find in Flash or in a video editing program, but it's really effective for ordering animations and for linking them to each other to play at the same time. And it's really easy to use.