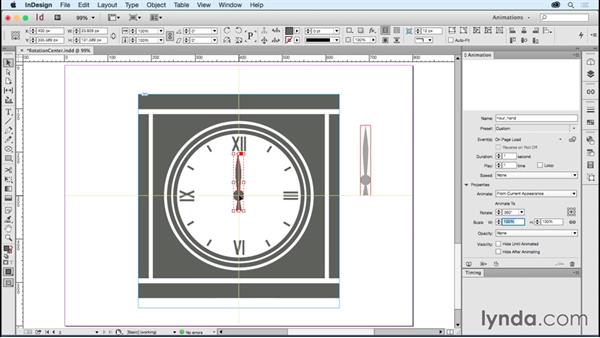 - We've talked about animation using rotation settings in other videos, but there's an issue that often comes up that I want to show you in this video. While we can set the orientation proxy for an object when it rotates, sometimes we need the rotation center or rotation point to be away from the object. I want to show you a couple of tricks for compensating for the fact we don't have a feature for that, or at least we don't have it yet. In this case, I want this rocket to rotate around the planet Earth. I can set it to rotate 360 degrees, but I really want the center of rotation to be in the center of the Earth and there's no way I can do that.

I mean, I can set this lower proxy, but that's only for the object itself. If we look at it in the Preview panel, we'll see that it does us really no good at all. I'm gonna remove that animation and I'll show you a little trick that in this case works really well. I'm going to create a new object. I'm gonna draw a circle that represents the path we need for rotation. I'll hold down the Option key to draw from the center and the Shift key to constrain it. And I'm gonna draw this right over the center of our little rocket.

Now I'm gonna select the circle and the rocket, and I'm going to group them. I now have an object whose center is pretty much where I want it to be, and so now I'll rotate this group 360 degrees. I'll keep the orientation point in the center, and this should work out just fine. Let's take a look in the Preview panel. Perfect! The rocket is orbiting the Earth, Captain. So for this particular kind of example, we can use a circle and group it with something and have the rotation occur in the center point of that circle plus whatever we have it grouped with.

But there's a more common case that I want to show you. Let's look at the next page of this file, and I'll play this animation for you in the preview panel. Here we have a clock, but notice that the hands actually extend past the center point where they're rotating. I seem to run into that a lot where I need a center point that's not right at the tip of something, but up inside the object so to speak. Let me show you a couple of different ways to address that issue. I'm gonna go to the next page in this file where I haven't assembled my clock yet, and there's two different cases here that we have to work with.

The hour hand here is actually a graphic I pasted from Illustrator so I can change its attributes, its fill and stroke. I could do the same thing, of course, with any InDesign object as well. So I'm gonna position this hour hand where it needs to be on the clock. Again, if I try to rotate this, I can't really put the rotation point here. I can only put it at the edge. So if I do that, I think you can imagine what we're gonna get. We're gonna get one wacky clock.

That is not good. So instead, let me show you the trick. What we need to do is create an object that makes the length of this such that the center point is right here. When you have an object where you can change the stroke and fill, it's pretty easy because we're gonna basically duplicate this object and then turn off all the fill and stroke attributes. I'm gonna set my reference point to the bottom center, and the way I'm gonna duplicate this is to put 180 degrees in the rotation field, and then I'm gonna hold down the Option key and press Return.

That makes a duplicate of this object. I'm gonna put it up over my original hour hand, and then I'm going to set its attributes to have a fill of none. So you're not gonna see it, but what it does is it now gives me when combined with this original shape, an object that I can center rotate and make the rotation occur exactly where I want. I'll group these two objects, set the rotation to 360 degrees. This time I can just leave the rotation proxy in the center and check it out.

Perfect! Now let's take a look at our minute hand. I'm gonna hide our hour hand here, and our minute hand is a little bit different. In this case, this is a placed graphic. I can't change the attributes of it. I can't go in and set the fill to none so I need to come with an object that I can add to it that will give me an object that I can then rotate whose center will be here. Well, it sounds complicated, but it's pretty easy really. In this case, I'm just gonna take an empty rectangle and I know that the distance from the center is here up to here.

So I have my new shape and I'm gonna bring it down so that the top of it is now in the center. When I select it with my original minute hand and group it, I now have the object I want where I can set the rotation to 360 degrees, keep the reference point in the center, and it should rotate correctly. Perfect, once again. I'll turn my hour hand back on and we can see these in the Timing panel.

I'll set them to play at the same time, and I want to increase the duration of my hour hand. It's gonna go a little more slowly than the minute hand. Let's check it out. Perfect! So in order the change the orientation point for rotation to be outside an object itself, group it with another invisible object and rotate that group. That will help you move the rotation center point to anywhere you need it to be.