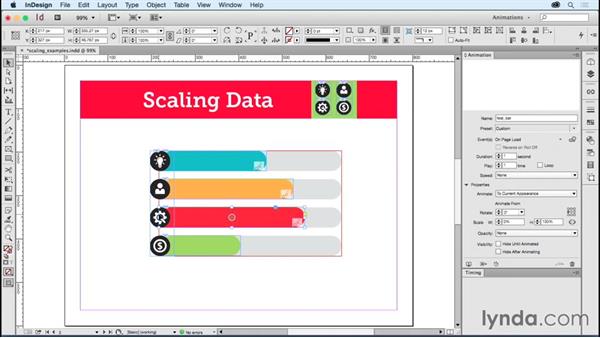 - Modifying the scaling properties to animate an object may not sound very flashy, but I think you'll be surprised how flexible and useful modifying scaling settings can be. You'll find the scaling options in the Properties section of the Animation panel. As we saw with rotation, there are some presets that will modify scaling for you too. I've selected my type and let's choose the preset Grow. This is going to scale my type from it's current appearance to 200% of its size.

Let's preview it. Kick it! It's screaming. In addition to the scaling, as with rotation we can change the orientation of the scaling. I'm gonna reset this to scale from the upper left-hand corner. And, let's take a look. Now it won't scale off the page. There, that's better. I'm gonna remove the animation from this type by clicking on my little trash can icon, and let's apply it to the soccer ball.

Again, I'm just gonna start with the preset and we'll set this one to Grow Large. Grow Large actually scales this to 800% which is ginormous. Check this out. It scales, scales, scales and it's so big it's almost completely off the page. So we can use these presets or we can put in our own settings, and that's when it gets really interesting. I'm gonna turn to the next page of this file and show you a very different kind of example.

I'm going to use scaling to create this animated bar chart. Only the first two bars have been animated so far. Let's take a look. Looks like they're growing. These are set to non-proportional scaling. The width scales differently from the height. Let me set these last two and show you exactly how the settings work. I'm going to select this third bar. I'm going to deselect the link that constrains the scaling value.

Now I want the width which is this direction, left to right, to be zero percent, and I want the height to be 100%. But here's the thing, I don't want to scale from this appearance to something. I want to scale to this appearance. So I'm gonna animate to the current appearance starting with a width of zero. The last step is I need to change the orientation proxy because I want it to start scaling from the left-hand side out.

The width is gonna start at zero and go to the right. Let's take a quick look before we do our last one. One, two, three. Perfect. So again, I want a width of zero, height of 100%, to current appearance starting from the left. Using disproportional scaling gives you all kinds of interesting possibilities including things like animating a bar graph.

One other example of an interesting effect that you can achieve with the scaling that I'd like to show you. I'm gonna turn to the next page of this file, and again, this page is partially animated. Watch the penny and the dollar coin here. The penny seems to spin and the dollar spins in the other direction. Let's take a look at what's going on here. When I click on the penny, it's set to scale from its current appearance to a width of zero.

So what happens is it starts in this full width and then it scales into the center to be nothing. It has the illusion of flipping. With this coin, to make it go in the opposite direction, again we set the width to zero and the height to 100%, but it's to the current appearance. So it's going to start, not there, so to speak because the width will be zero, and then it's gonna expand out to the left and the right to 100% to the current appearance.

We have a lot of coins flipping. And one last thing that's really interesting is the following: What if I put this side of the quarter over the other? Let's see what happens. The penny and the dollar coin are the same, but the quarter looks like it's spinning all the way around. Pretty interesting, huh? With disproportional scaling, you can make things seem to spin or grow. We're going to be using non-proportional scaling in a lot of other videos.

Scaling is one of InDesign's animation hidden gems as far as I'm concerned. And you can do a lot more with it than you might think. Turns out scaling is pretty flashy after all.