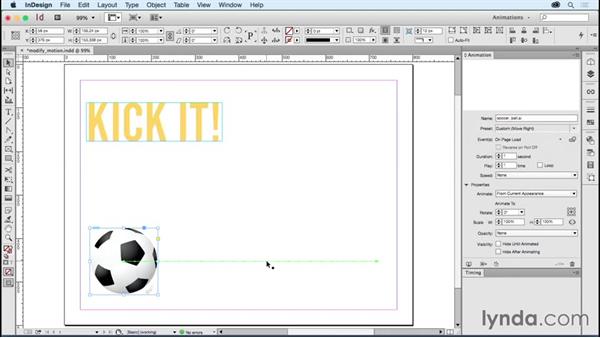 - We've seen that there are several presets that apply motion paths to objects such as on the soccer ball where I have the Move Right preset applied. We also get motion paths from these Fly In presets as well. When I choose a preset with a motion path such as Move Right, the motion path is added and we can see it as this green line going across the field here. If we turn on the Animation Proxy in our Animation Panel, we see that when this soccer ball moves, it's going to end up right here underneath the right goalpost.

I'm gonna turn off the background so we can see it a little bit more clearly, and I'll zoom in by pressing the Z key. Now the motion path applied by the preset, is not the motion path that we have to use. It's pretty easy to modify, and a lot of the times the presets don't give you exactly the path that you want. If we look here more closely, we can see that the beginning of the motion path is represented by the green dot on this line right here and it ends where this arrow is. There are actually two paths here.

The dots that you see on this line are the easing path which are set by the speed controls here in the Animation panel, Ease In, and Ease Out, and so forth. And there's the straight line which is the motion path. Now we can't edit the easing path, but we an edit the motion path. To edit it you simply point to the path and click on it, and then you an grab the end of it and make it longer or shorter for that matter. Let's make ours a little bit longer and then we can zoom out, turn on our background, and if we turn the Animation Proxy back on we can see that the ball is gonna go just to the edge of the field.

Let's preview it. There it goes. It honors the new motion path. You can edit this path basically any way that you would edit any path in InDesign. For example, another way I can edit it is to make it go at a diagonal. I'm gonna turn our background back off and I'll click on the path, but this time I want to grab this endpoint with the Direct Select tool because I'm not just gonna move it back or forth. I need to change it to another angle.

I'm gonna just drag it over to here and let's turn our background back on. See if that's about the right spot. That looks perfect. And now if we click on the soccer ball, we can turn on our proxy and it's gonna go right into the goal. Let's preview. Score! So the path is really just a path, and again we can edit it any way we like. One more example I want to show you is I'm gonna reset this back to the standard Move Right path.

I'll click on this and make it a little bit longer. The other way that I can edit this path is to add points to it and make curves. So I'm gonna select my Add Anchor Point tool, and come in and click in a couple of places. Let's turn off that background again so we can see it a little bit more clearly. And I've added two points, one here, and one here. I'll get the Convert Direction tool, and I can make this a curve point, make this a curve point, and then with my Direct Select tool I can move them around and make this go on a curve.

All standard editing practices. There's my curve. And now if we turn our background back on and preview, we'll see the ball go in an arc. Pow! Almost a score, not quite. So we can modify this motion path any way we like just as we would any path in InDesign. Start with a preset, then use the same path editing tools that you would for any path to make it longer, change its direction, or even change its shape.

You can even draw your own motion path using these tools and we'll take a look at that in a different video. The most important point is you don't have to be stuck with the motion path that you get from a preset. You can freely edit it and make it your own.