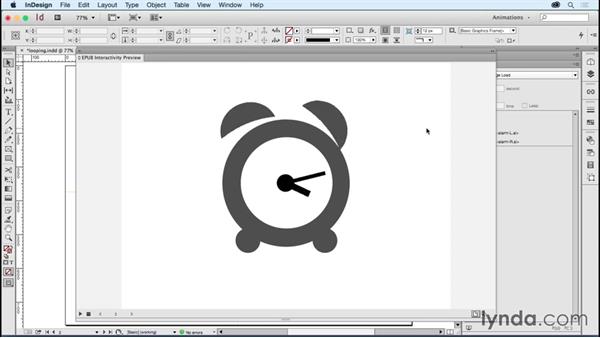 - One of the issues related to timing is the ability to loop objects or play them multiple times. There are two places you can make this setting. One is in the Animation panel. We can loop or play an animation multiple times. We can also loop animations in the Timing panel, but they have to be linked animations. I can't just select one here and then loop it or play it multiple times. I'm gonna show you the difference in using each of these settings. And when it comes to looping, there's a good news, bad news story here.

The good news is is that looping works great for many animations. The bad news is it has some limitations and it doesn't work well for other animations. Let's start with the good news. Here we have a clock and I've done some of the animation on it. I have a minute hand that's set to rotate 360 degrees for one second. And my hour hand is also set to rotate 360 degrees for one second. I'm gonna set both of these to loop.

Let's see what happens. The minute hand plays, the hour hand plays, and then they both go round and round. For this kind of simple movement looping works really well. However, in this particular case, this is not exactly what we want. Let me make a couple of adjustments. First of all, we want the minute hand to go around the clock face more quickly than the hour hand. So I'm gonna increase the duration of the hour hand to three seconds. It's gonna take it three seconds to go all the way around the clock face.

The other thing that I want to do is I want them to play together. I want them to start at the same time, and just go around the clock at a different rate. Let's take a look. They both start at the same time and their both looping beautifully. This is a case where looping, or playing multiple times works really great. Now, what if I set these to loop just in the Timing panel? What's the difference between that and looping them in the Animation panel? Well, let me take the looping off of both objects in the Animation panel.

And now we'll go to the Timing panel where they're already linked and I'll set them to loop. So, they start out okay, but notice how the minute hand stops. Because it's linked to the hour hand, it's actually rotating once but then it's not looping until the hour hand is done. It's waiting three seconds for the hour hand to catch up. Well, that doesn't work in this case. And clearly, for our clock animation, we want to have these looping in the Animation panel.

But this little delay, or the fact that the longest animation determines how frequently the looping occurs here can be used to your advantage. Let's look at another example. I'm gonna go to the next page of this file. And let me play this animation for you. In this case, the clock hands are moving just as we had set them before. But notice that the alarm bells are only ringing at three o'clock. In this case, we're using the fact that the longest duration of an object delays the looping to our advantage.

I'll show you the Timing panel. All of these objects are set to play at the same time, and they're all set to loop. The longest duration of any object playing is the hour hand which takes three seconds. In the Animation panel, the minute hand is set to loop here. That's because, as we just saw, we don't want it to wait three seconds to animate. We want it to loop in one second all the time. But the alarms aren't set to loop here, they only loop in the Timing panel.

So they wait, as they are supposed to, Until the hour hand goes all the way around. Now, there are some limitations with looping that depending on the animation can cause some issues. Let me show you an example. Let's take a look at this animation which is not set to loop at all. A dot moves in, and then the type fades in. I'm gonna turn off the type for just a moment and I'm gonna show you a characteristic of looping that sometimes is a little problematic.

This object is set to move right and I'm gonna set it to loop. The duration is one second. Watch what happens. It plays for one second but then it loops immediately. There's no way to set a delay on when the loop is going to occur. It's instantaneous. And I wish we could set a delay. What I'd love to have is a little field here that lets me say when I want the looping to occur. But we don't have that. And I'll turn my type back on and show you how that can be a problem. I'm gonna click on the type and set it to loop and the animation will play okay the first time but then when it starts to loop things go crazy.

They sort of ignore each other and the ball comes in when it feels like as does the type. and it just doesn't work to have this logo come in more than one time. You might think, well, let's loop them in the Timing panel. So if I turn off looping here, and set them both here to loop we're not going to see much difference. It plays fine once, and then starts going wacky. I've tried using the fact that looping in the Timing panel is delayed by the longest playing object.

I've put in an empty rectangle and set it for an animation, something as simple as Appear, for a longer period of time like three seconds. Then I thought, being clever, I would simply link it to these other objects. However, that doesn't really help the situation. It's actually going in reverse. I want the ball to come in first and then the type. It looks a little bit better, but it's still not a total solution. So, looping and playing animations multiple times can be useful.

There are limitations, though. So try to use them in situations where it works the best.