Including animations in Object States (MSOs) 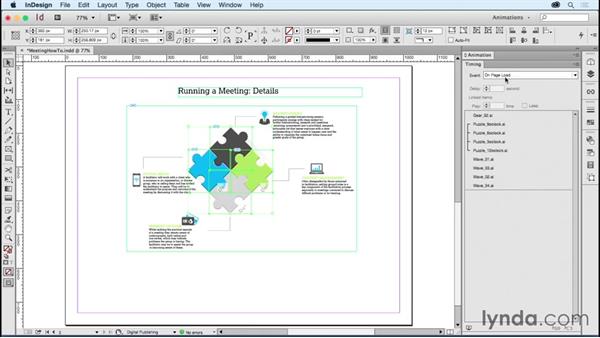 - One of the more interesting interactive features in InDesign is the ability to create object states, sometimes called MSOs, which stands for multistate object. An MSO is created with the Object States panel... and it's a special single frame that can splay more than one object by creating different states for each object. You can learn more about creating MSOs in other titles on lynda.com, including InDesign CC: Interactive Document Fundamentals with Mike Rankin. But in this video, I want to show you how MSOs can be even more intersting when you include animations in the various states in an MSO.

It opens up a whole new world of possibilitites. When we create MSOs for fixed layout ePubs or other formats that support animations, we need to use buttons to move from one state to the next or to move to a specific state. Let's take a look at this example. I'm gonna play it in the Preview panel. These buttons switch to a state in the MSO and an animations plays in each. Here we have puzzle pieces growing in, and here we have graphs growing in this statistics layer.

Pretty neat, huh? Let's take a closer look at this. First, let's look at the MSO on this page. I'm gonna click on it and open the Object States panel. We have the start state, which isn't triggered by a button, it's just our opening state, and then we have the overview state, and the details state. In each state, the animation has already been set. If I click on one of these puzzle pieces, you can see that it's already animated. In fact, all four of these are set to grow from a scale of zero up to their current appearance.

And they're all linked to play at the same time. Let's take a look at the Timing panel. Notice in the Timing panel, because this is part of a multistate object, the event is not On Page load, it's now On State load. And here are all the puzzles pieces, and they're linked to play at the same time. Let me show you more about how this was put together. I'm gonna turn to the next page of this file and go out of Preview mode. And I have my various animations created, but I don't have my object state created just yet.

One thing that's really important when you're working with animations and MSOs is to use your Layers panel in a very organized way. I have each state of this MSO in its own layer. So this is the opening state, I'm gonna hold down Option or Alt so we isolate that, and this is the next state... and the next state. And I have them each in their own layer so that I can turn off all the other layers and just focus on what's going on here. Because with animation in particular, it can get a little compicated.

Now, in this layer, again, we have these four puzzle pieces, and they've all been set to scale up or grow. And, right now because they're not part of a multistate object, they're set in the Timing panel On Page Load. We can also see the other animations in the other objects here because right now everything's just on the page. It hasn't been turned into an object state yet. Once I've finished with my animation and it works to my satifaction, I'm gonna select all of the objects on this layer, and I'm gonna group them just to keep things nice and tidy.

Now I'll create my object state. I'm gonna hold down the Option or Alt key, and click on the Visibility layer so that everything is visible. Now, I'm gonna use my Layers panel to select the various layers for my object state. Again, the Layers panel really comes in handy here. I'm gonna hold down the Shift key, and then click next to each layer, which is gonna select each piece of my MSO. Now I'll open the Object States panel and create my object state. There's the start state. State 2 is the overview, and I'm gonna label these right in the Object States panel because we're gonna have our buttons refer to these later and we need to know which state is which so that we have the button pointing to the right place.

So, our object state is set up. I'll actually set the start state back. And now we'll create our buttons. The Overview button I'll click on first, and then I opne my Buttons and Forms panel. I'll click on this icon to create a button, and then the action is I want this to go to a specific state. Here's my multistate object, and I want this button to go to the state for Overview. We'll do the Details button. First, create a button, and then set the actions Go To Sate.

This one goes to the details state. And finally, I'll click on my Statistics button and add the action Go To State, Stats. Okay, let's take it for a spin. I'll open it in the Preview panel. And that looks great. The animations that we've already set play each time I go to that object state. And the buttons work great. But, on this state, the animation isn't in the correct order.

How do I get to this in the Timing panel to correct it? If we look at the Timing panel, there's nothing there. And clicking on the button just shows me there's a multistate object of some kind. Instead, I have to click on the Object States panel, select my object state, and go to that particular state. Once select that state in the Object States panel, then my Timing panel shows this On State Load, and I can see the different elements of animation in that state.

And sure enough, wave 2 is out of order with wave 3. So I can just fix it here. We'll set our start state back, and now we'll just check out and sure that that button works correctly. Perfect! Hopefully you can see from this example what I meant when I said this opens up all kinds of possiblilities for interactivity and engagement in your projects. Once again, animations raise the bar and can bring your project to a whole new state.